For most birders that first outing of the new year is always extra special. It doesn’t matter what one might see from Robins and House Sparrows through to Golden Eagles or Firecrests, all species carry with them an additional excitement factor of being “first for the year”. When else for instance can you find even the most ardent of twitcher clamouring after a Pied Wagtail or, dare I say it, the humble Feral Pigeon. It’s a brilliant time to be out in the field, no expectations for what lies ahead and a complete reset from the highs and lows that may have come before.

Personally we normally open a new birding year at our local Wildfowl and Wetland Trust centre in Llanelli but this year I was after something a little more, well, goose shaped. Now some may scoff and query my feathered preferences but first, let me explain. As I talked about extensively in my last post my objectives for this new decade are to enjoy what I do. That goes for bird watching too and although I’ll undoubtedly go after a few local rarities in the coming months, I have no grandiose listing targets in mind. Instead I shall simply be aiming to watch and absorb whatever presents itself, be that admiring the iridescent feathers of our resident Magpie or watching Short-eared Owls quartering the local marshes at dusk. And this is where geese come in. Being large and relatively gregarious animals they have a tendency to be easy to find and even better, stick around for hours if not days on end. No frantic searching through undergrowth here. Then there’s the sounds. I challenge anyone to admit that there’s not something about the mass calls of hundreds of geese which doesn’t stir your soul. Even hearing the small local flock of Canada geese flying over our house still has me running to the window, plastic fantastic though they may be. In winter there’s really no better place, certainly that I know of, for goose variety than at Slimbridge so it was on a misty Wednesday morning there that our birding exploits began.

And boy did we get geese. From the newly rebuilt, and rather impressive it has to be said, tower hide we were treated to over three hundred Barnacle Geese as well as the commoner Greylags and Canadas. A little more distant and almost obscured through the murk a small flock of White-fronted fed, what little light there was picking out the bases of their beaks brilliantly. Even better however were five Pink-footed hidden amongst them, easily separated by darker heads and slimmer bills. We were definitely on a roll and things only improved further when four Common Crane noisily announced their arrival on the scene, huge birds which still manage to look both prehistoric and alien at the same time. Watching them strut along the mudflats, dwarfing geese and Curlew alike, I couldn’t help but smile.

But I’m sure you didn’t just come here for an entire post of goose focussed writing so instead let’s move on to a pair of Water Rail which apparently haven’t read the manual. More usually known for skulking along the fringes of reed lined pools, having not one but two feeding out in the open beneath a bird feeder no less, and at incredibly close range, is almost unheard of. Not only that but we were treated to some exceptional behaviour including plenty of calling and even a short period of mutual preening. Oh for some sunshine though as the constant movement and low light did nothing to aid photography. 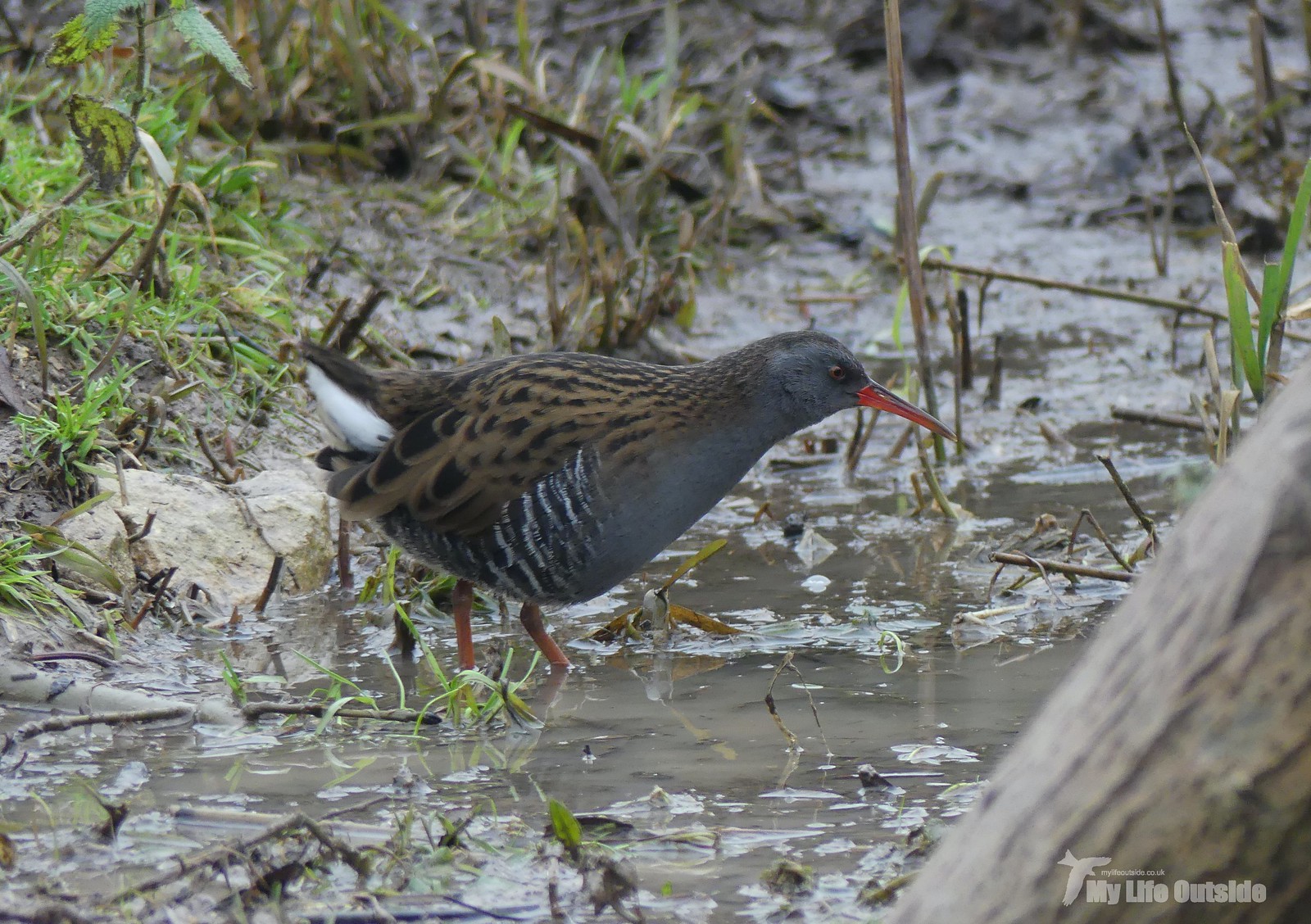 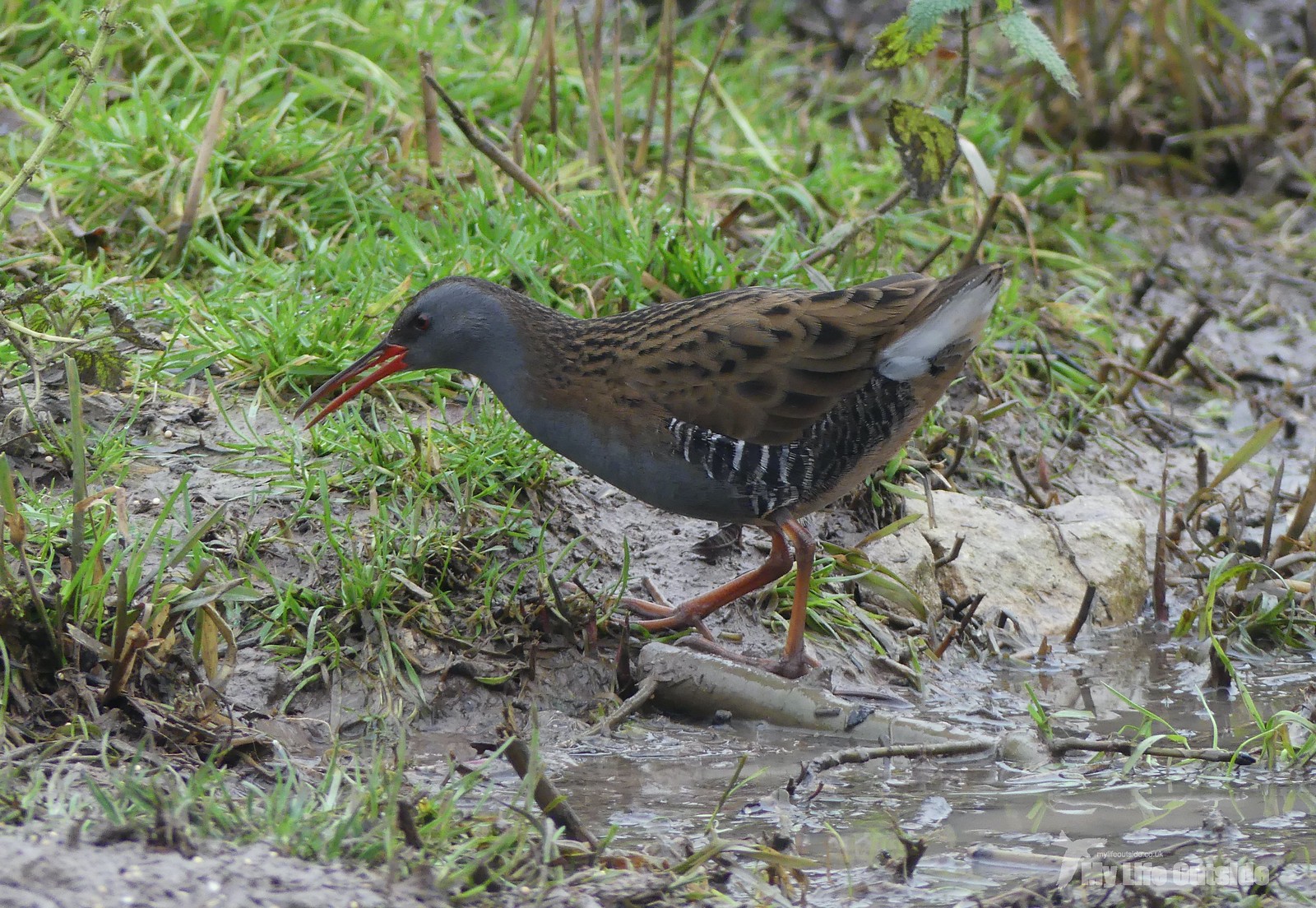 Elsewhere on the reserve highlights included a small flock of Redwing, thousands of waterfowl including Wigeon, Pintail, Teal and Shoveler plus a remarkable count of well over one hundred Common Snipe from the Zeiss hide. I’m pretty sure that’s a personal record. Other than the Snipe waders were in relatively short supply with a small number of Golden Plover, Dunlin and Black-tailed Godwits knocking about. Final honours on what had been a very successful day went to the lone female Goldeneye loitering outside the Peng observatory. Very nice.

Fast forward a few days and we’d swapped the misty midlands for mid-Wales’ finest, Aberystwyth. Though dry the weather was distinctly stormy with high tide bringing waves crashing over the sea walls. A nightmare I’m sure for local residents but conditions that I absolutely adore. 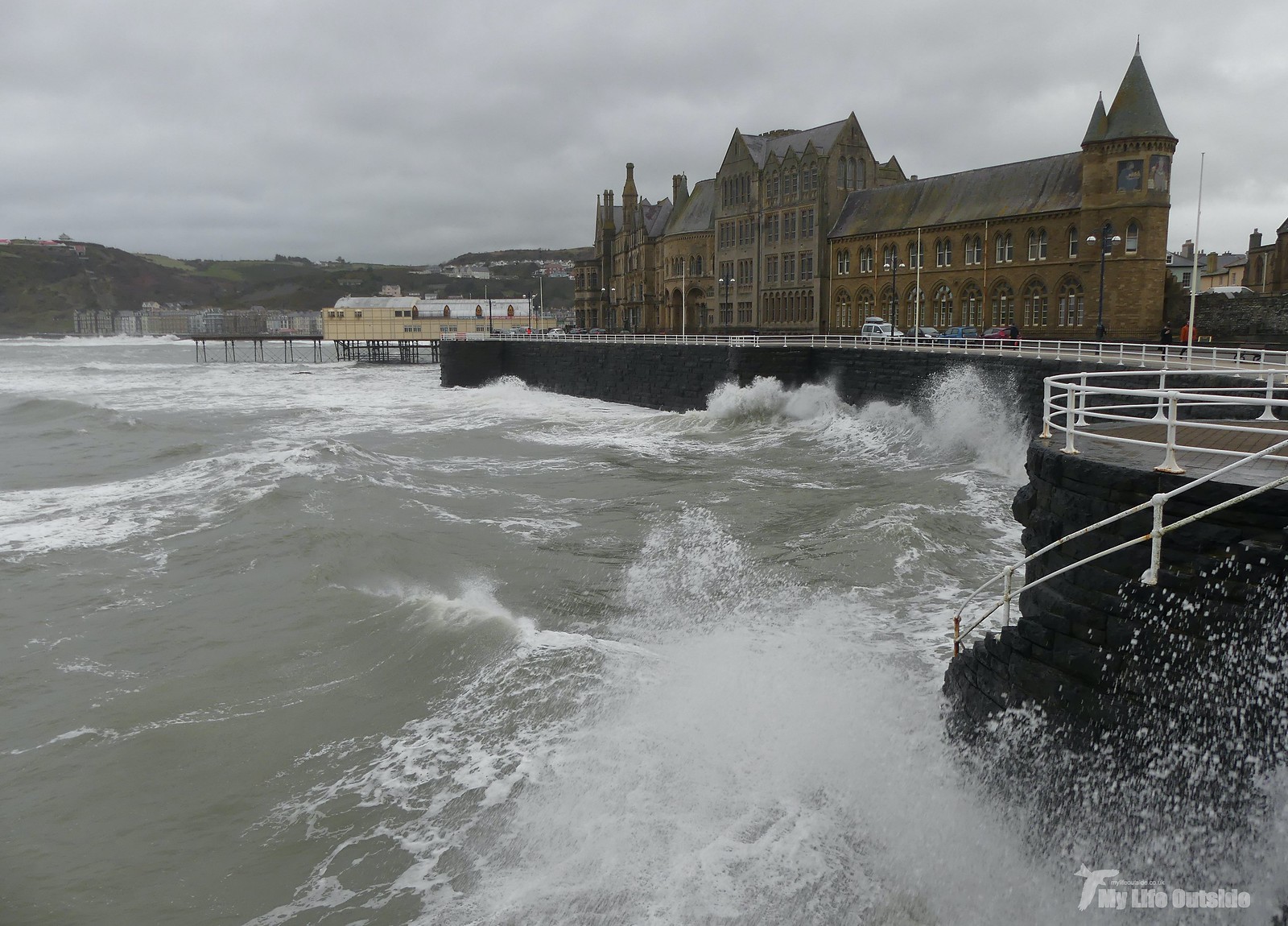 In such harsh environments it always amazes me how often it’s the tiniest of birds who eke out a niche, in this case Purple Sandpipers which have become something of a January staple for us here. This time we found five hunkered down on a couple of small crevices in the sea wall and if my experience of hanging over the edge to photograph them was anything to go by, they have my full admiration. 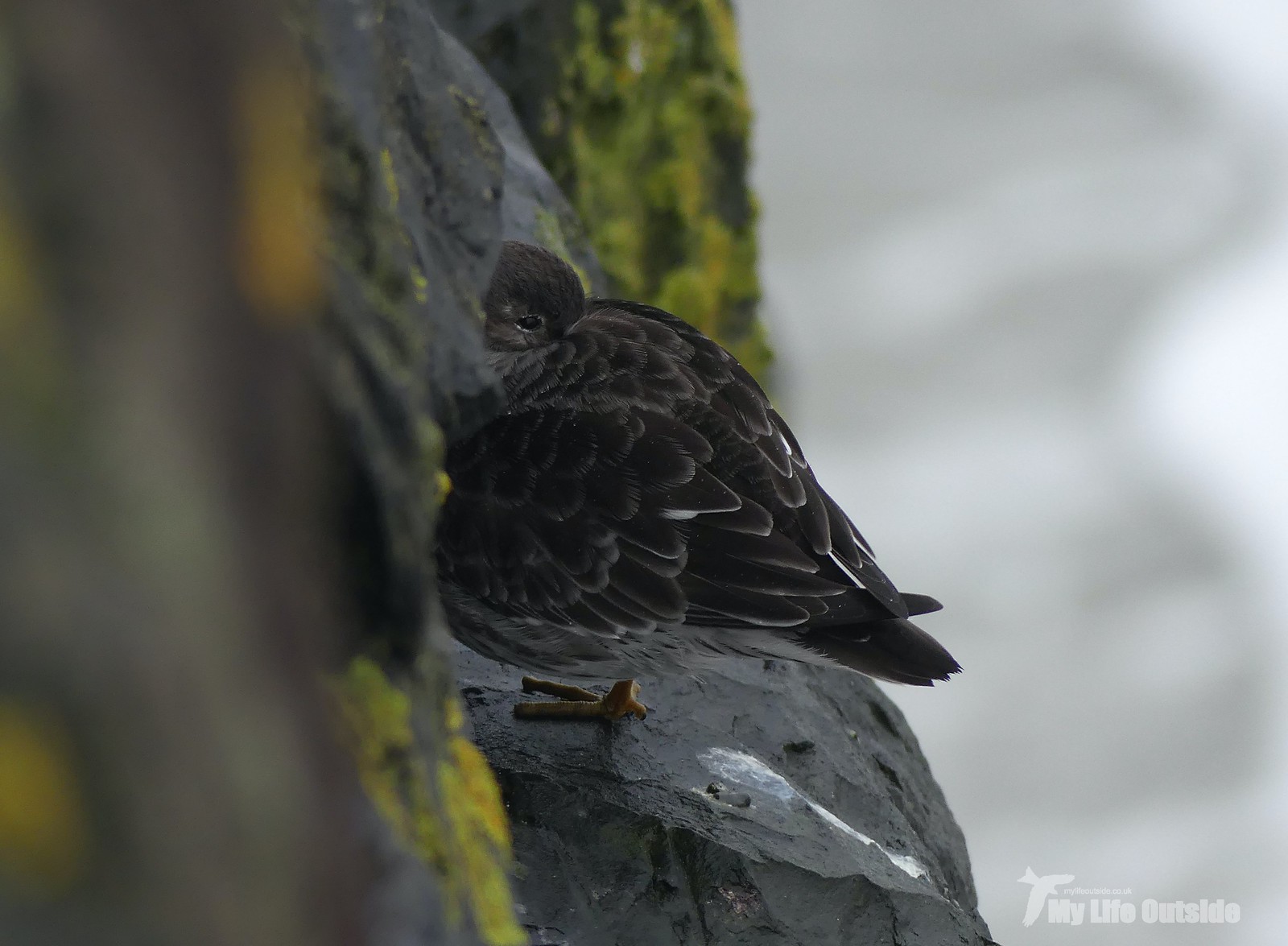 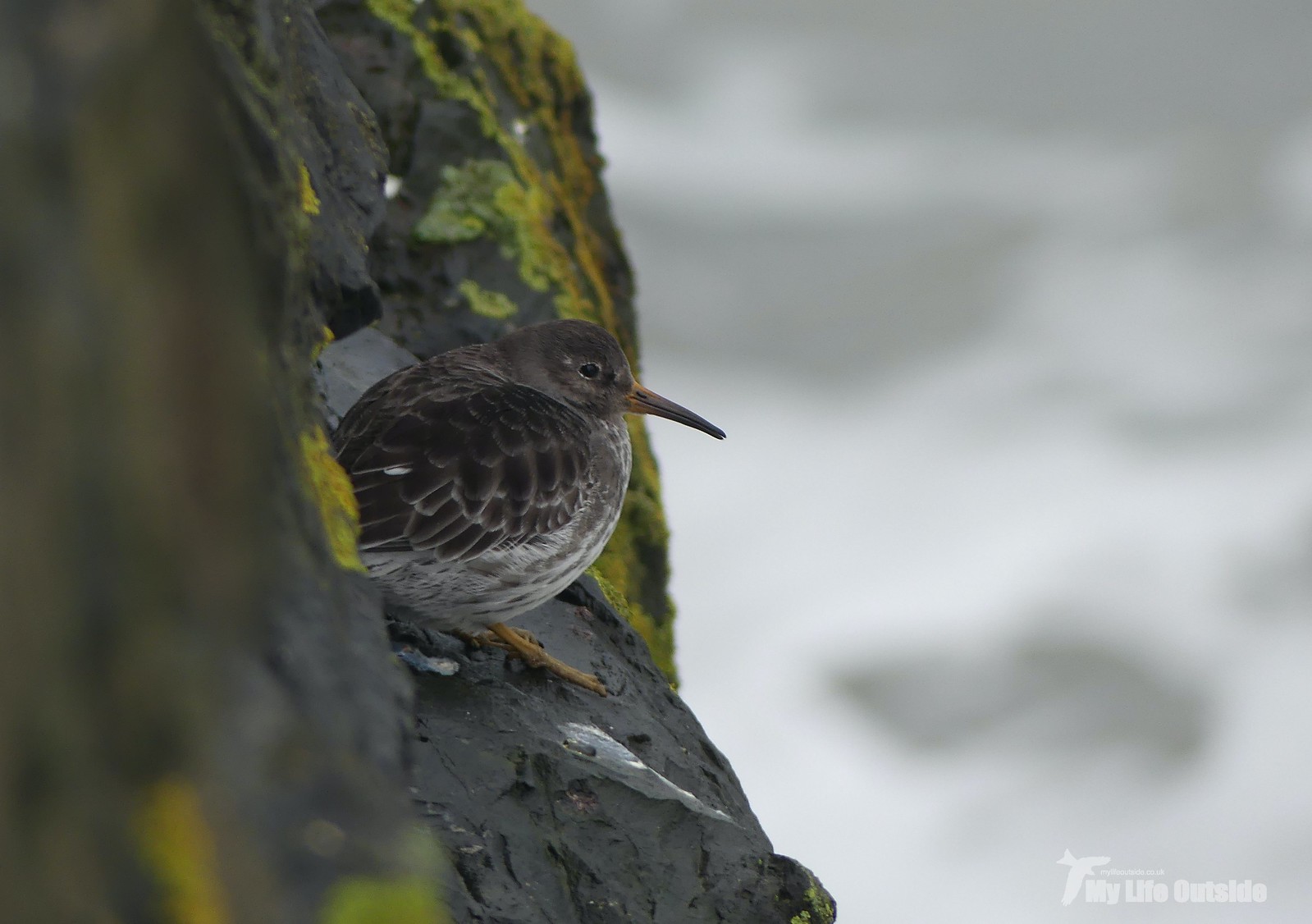 Further along the beach were a couple of Turnstone but it was only when we’d made it inland a short distance to the RSPB reserve at Ynys Hir that things really picked up. I’d heard that a female Smew, or redhead if you prefer, had been around for a few days previous and was delighted to find it still feeding distantly when we arrived. In fact she would probably have been my bird of the day had it not been for a male Hen Harrier sweeping across the landscape in all its ghostly grey majesty.

A week later and it was the turn of a Gower double-bill, beginning at Rhossili. Sun soaked and absent of gales for a change we were pleased to see several Fulmars soaring beneath the cliffs whilst a count of five Chough was our highest there for some time. Out at sea I could just about pick out the overwintering flock of Common Scoter but there was no missing the hundred or so Sanderling busy running up and down the beach. These are my favourite waders, excluding Oystercatcher of course, thanks mostly I think to their clockwork nature. Quite how they manage to move their legs so quickly is a mystery in itself but I did my best to get a few shots before the inevitable dog off lead sent the whole flock scarpering. 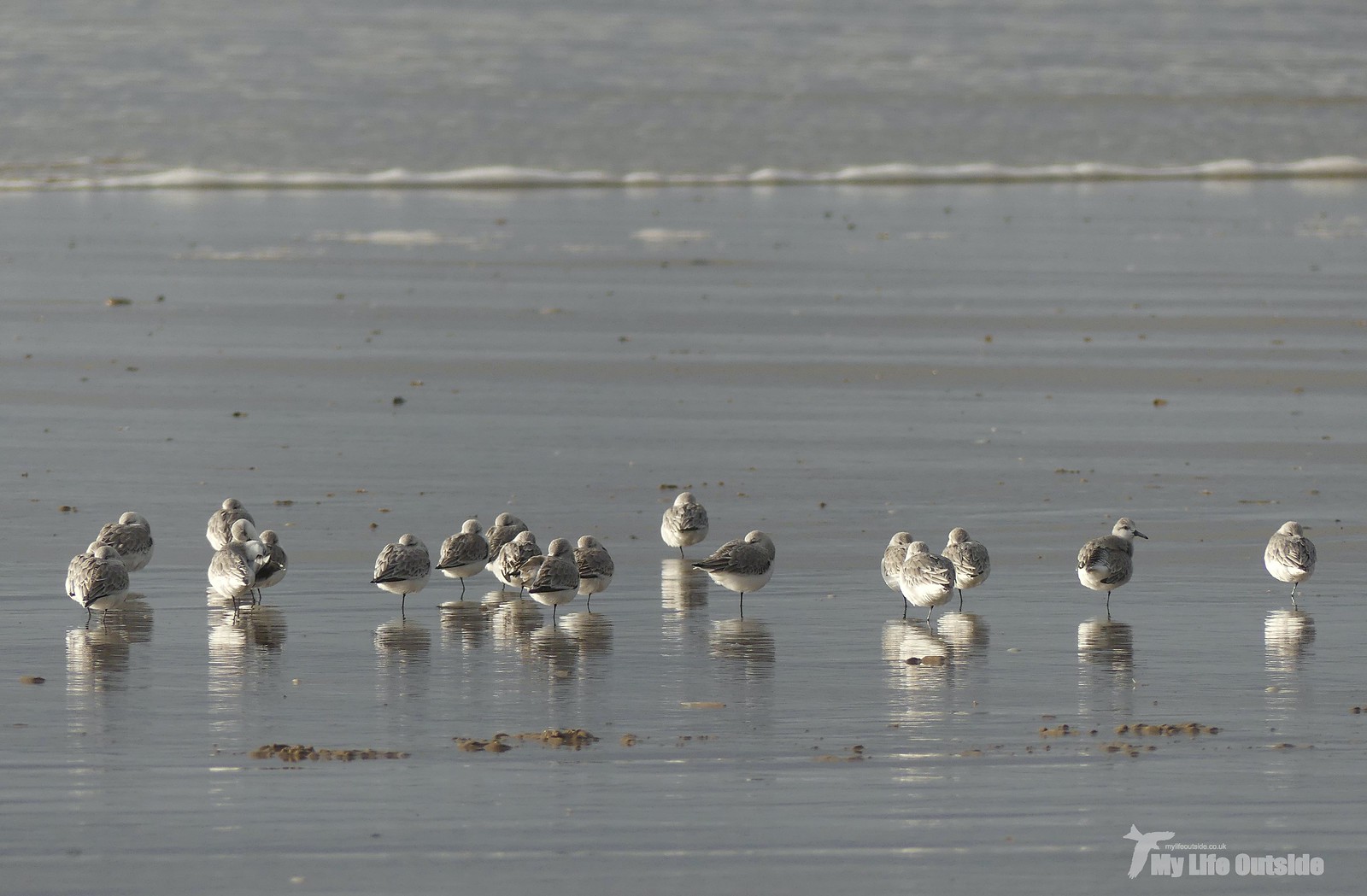 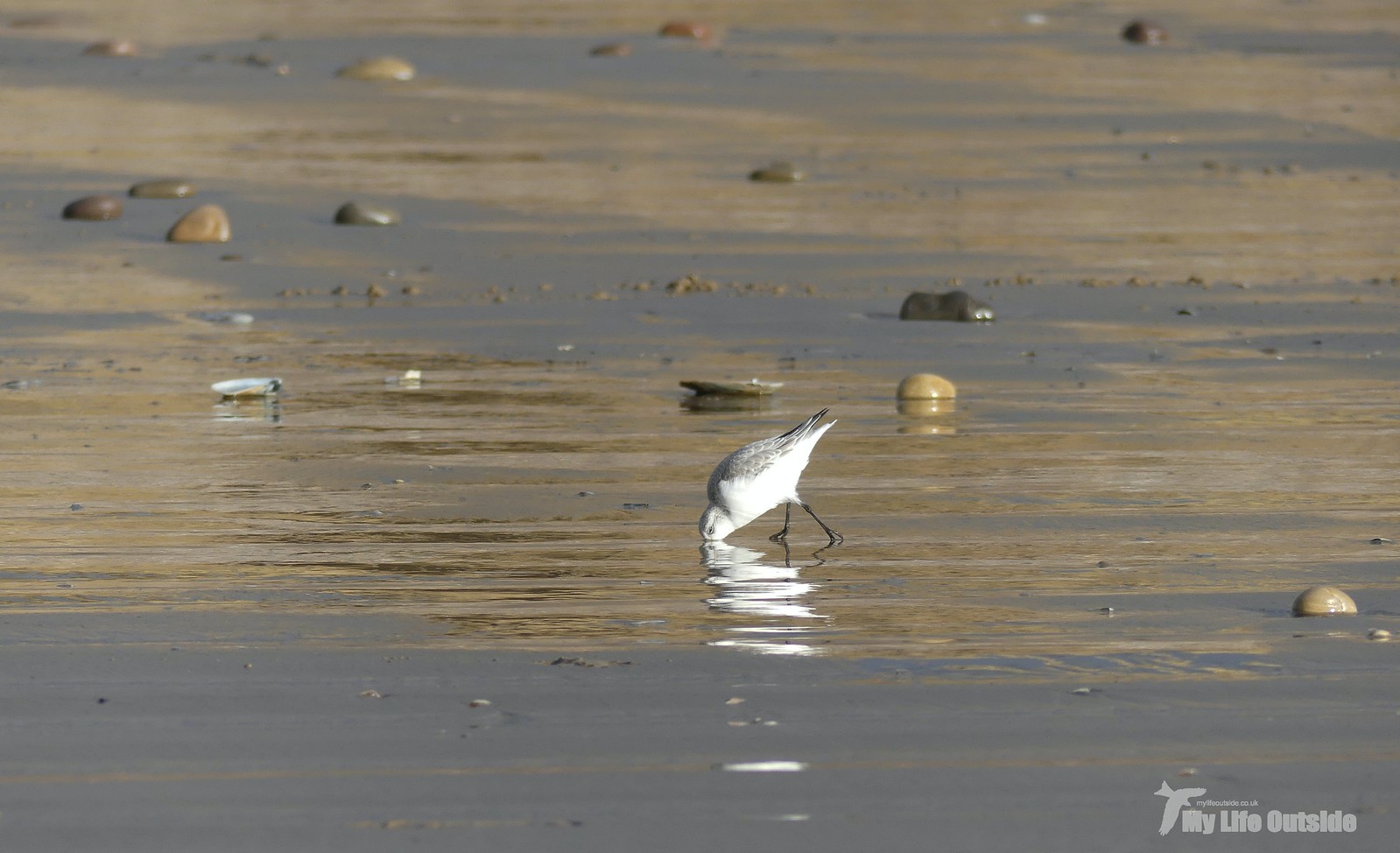 Next day we popped down to Whiteford in similarly glorious conditions where again the sheer number and variety of species on offer was remarkable. Common Snipe were constantly relocating amidst the flooded dune slacks whilst flocks of Ringed Plover and Turnstone, forty apiece, were very nice to see. For once we’d even managed to time our visit with high tide, possibly for the first time ever if memory recalls, and boy did we reap the rewards. First up were at least seventy Brent Geese including five pale bellied, a much rarer race locally than the more usual dark-bellied, before I lucked out on a thigh rubbing worthy Long-tailed Duck. It remained distant but thanks to the incredible light we nevertheless got brilliant views though little did we know even better was to come. Looking up the Burry Inlet we recorded in around half an hour no less than seven Scaup, sixty Eider, one terrorising Peregrine Falcon, three Slavonian Grebe and two Long-tailed Duck! Yes, two! Rarely have I recorded such quality from here in such a short space of time.

If these few weeks have been anything to go by then I can’t wait to see what else lies in store for the coming months.

Stunning shots of the Water Rail. Also like the Purple Sandpiper- not a bird I see very often.

Haven't been to Slimbridge for a few years. I think last time I was there one of the Salisbury Plain released Great Bustards was there- awesome in flight.

If you're into geese north Norfolk is worth a winter visit with many thousands of Pinkfeet + Brent, small numbers of Whitefronts, feral flocks of Greylag, Canade + Egyptian. Also often a rarity or two. I've seen Red-breasted, Ross's (though not officially accepted most birders believed it to be wild), Snow + of course both Bean Geese.

Thanks very much. I'd love to get across to Norfolk more often but it's a hell of a long drive from west Wales. Hopefully we will though at some point this year.