The second half of our Dorset break began with yet more unseasonably warm, sunny weather. So warm in fact that as we strolled along the seafront in Lyme Regis strange and long forgotten thoughts began to surface in my mind. Admittedly they had a job to push through the overriding mental image of the pasty I’d be devouring for lunch later on but nevertheless, there they were – it’s almost warm enough to remove my coat ………. 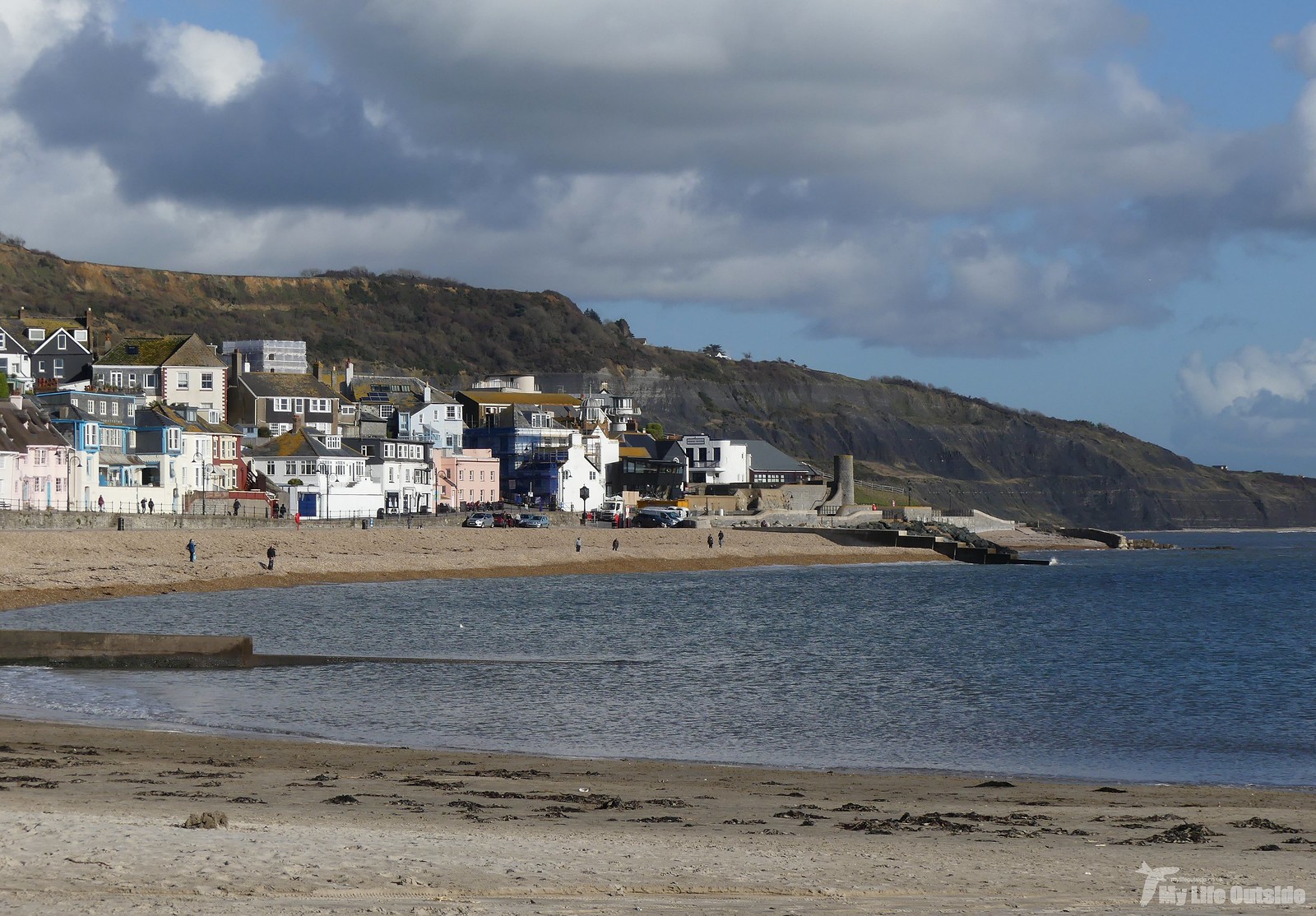 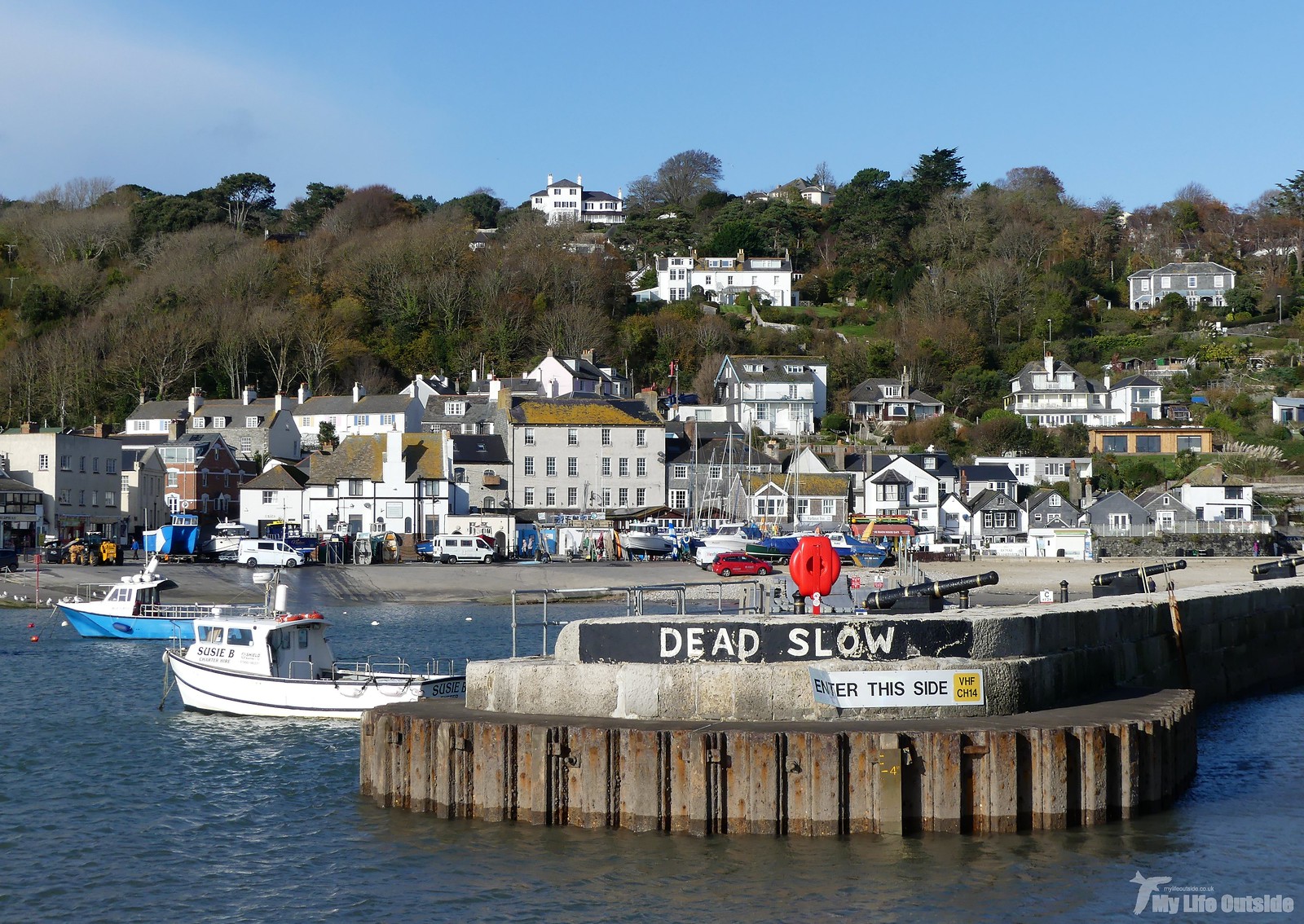 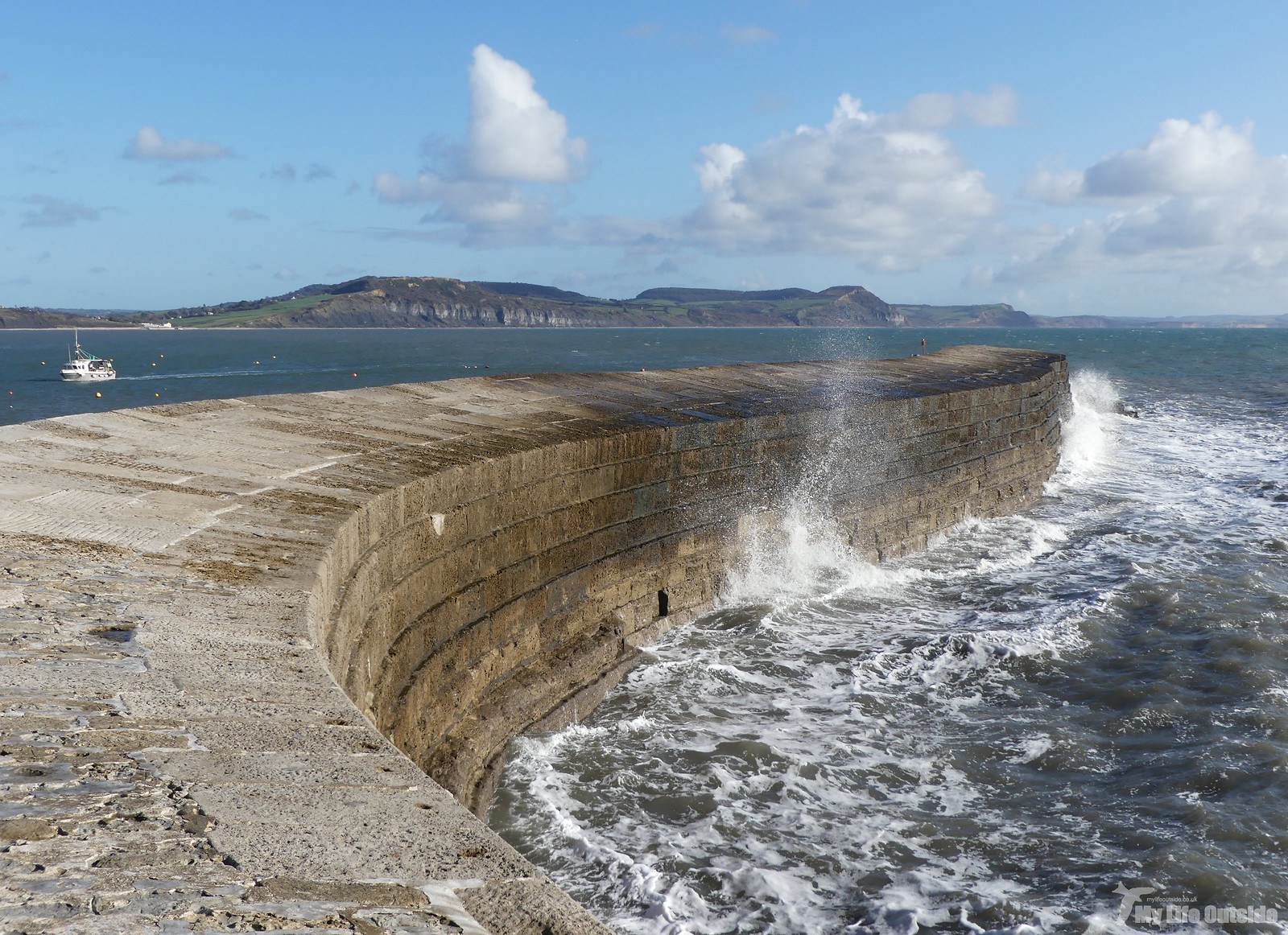 Almost, but not quite. Stepping atop the iconic stone walls of the Cobb revealed the reality, a biting wind whipping in from the north which tore through our layers like a hot knife through butter. Thankfully there was plenty of avian interest to make the exposure worthwhile, firstly in the shape of a large diver species rapidly retreating from Lyme Bay (I want to say Great Northern but couldn’t be absolutely sure) followed by a local celebrity. This male Eider is currently spending its second winter in Lyme Regis and having watched it scoff down a chunk of discarded fish, I can see why the temptation to leave has not won out. Thanks to the small fishing fleet there’s essentially a ready supply of free food on tap, and who’s going to turn that down? 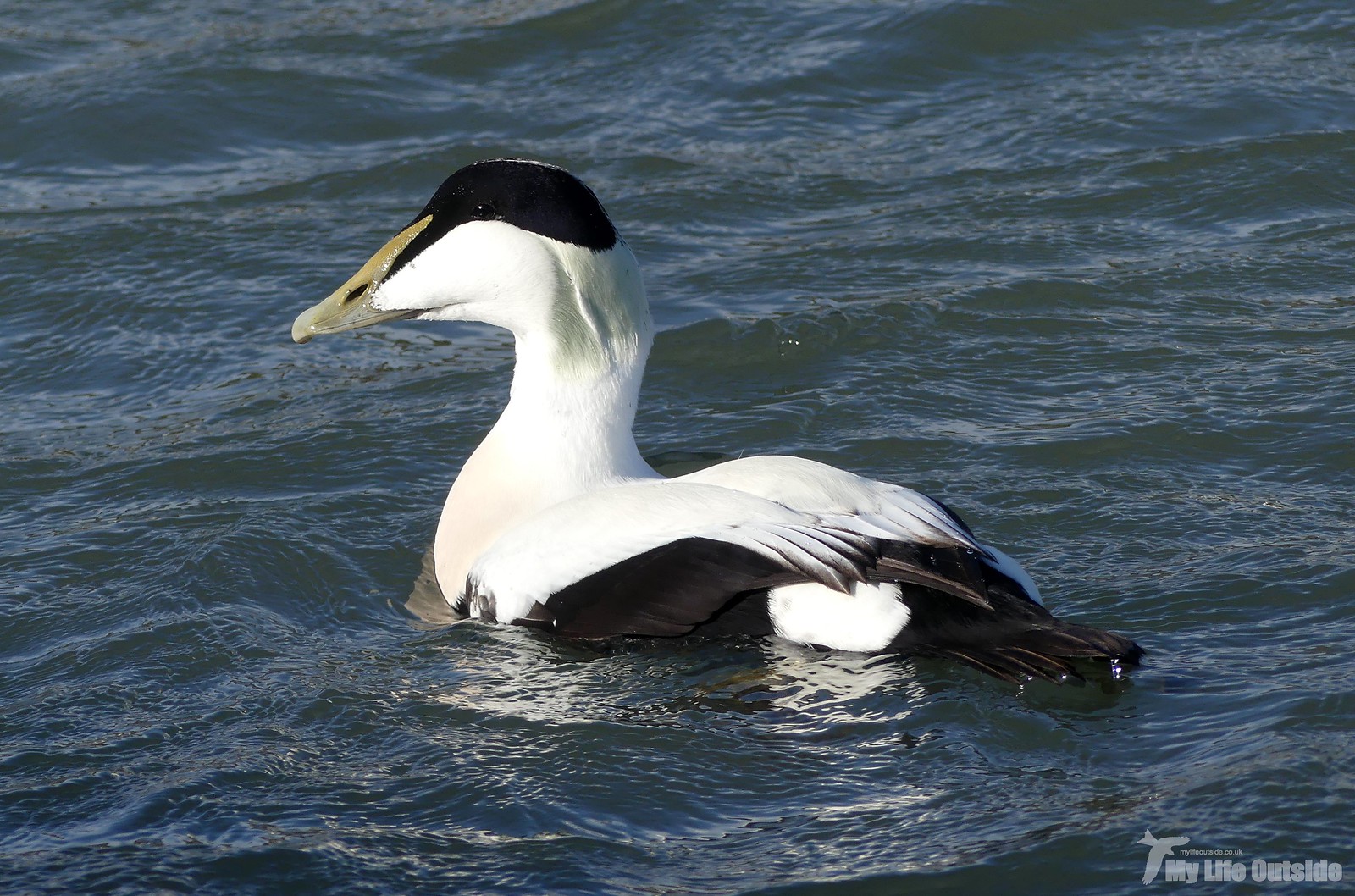 A short distance away the breakwater rocks held at least three Purple Sandpiper which proceeded to lead me a merry dance as they continually dipped in and out of view. More forthcoming were a small flock of Turnstones along Monmouth Beach whose ability to throw around quite large pieces of material was a sight in itself. 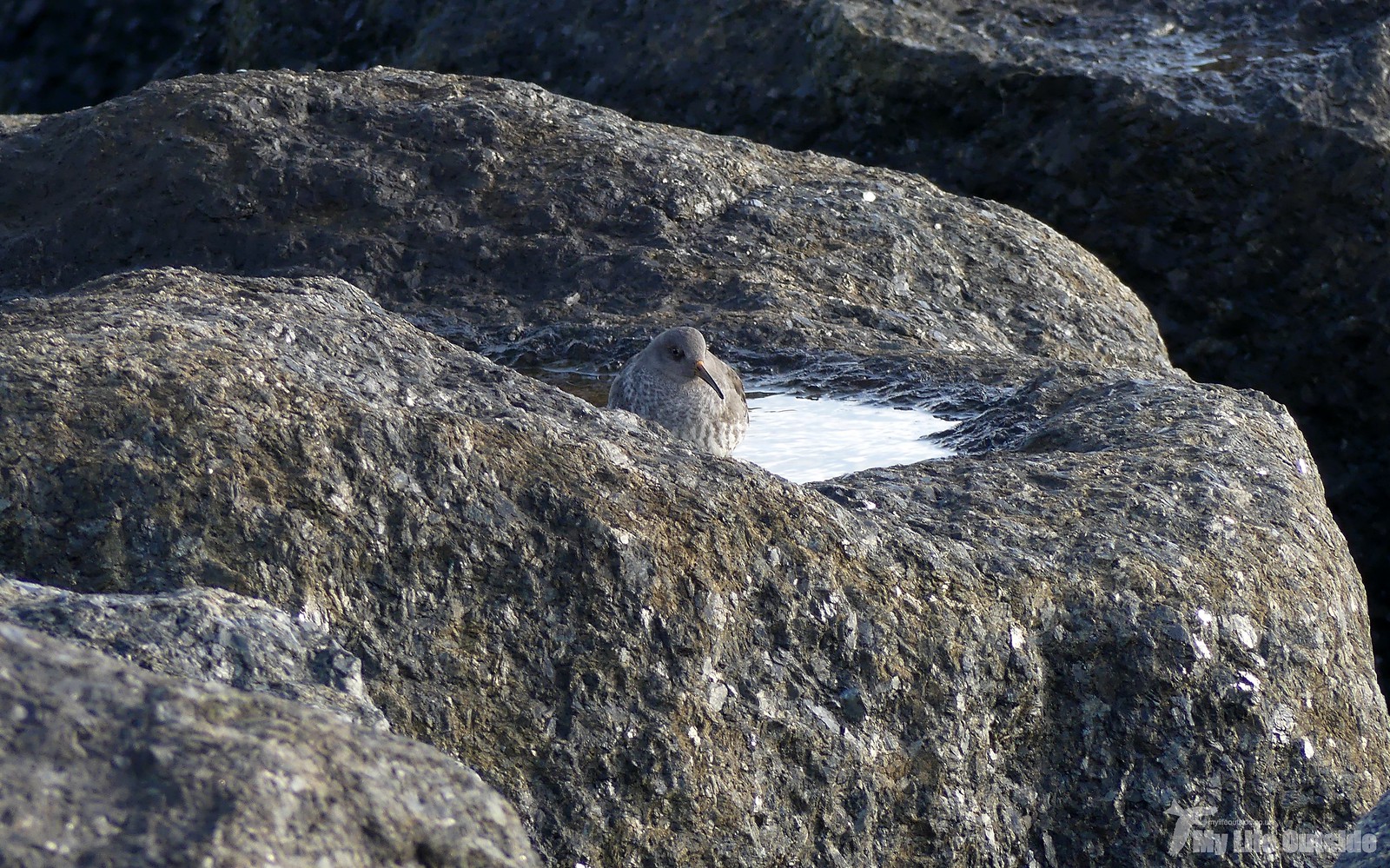 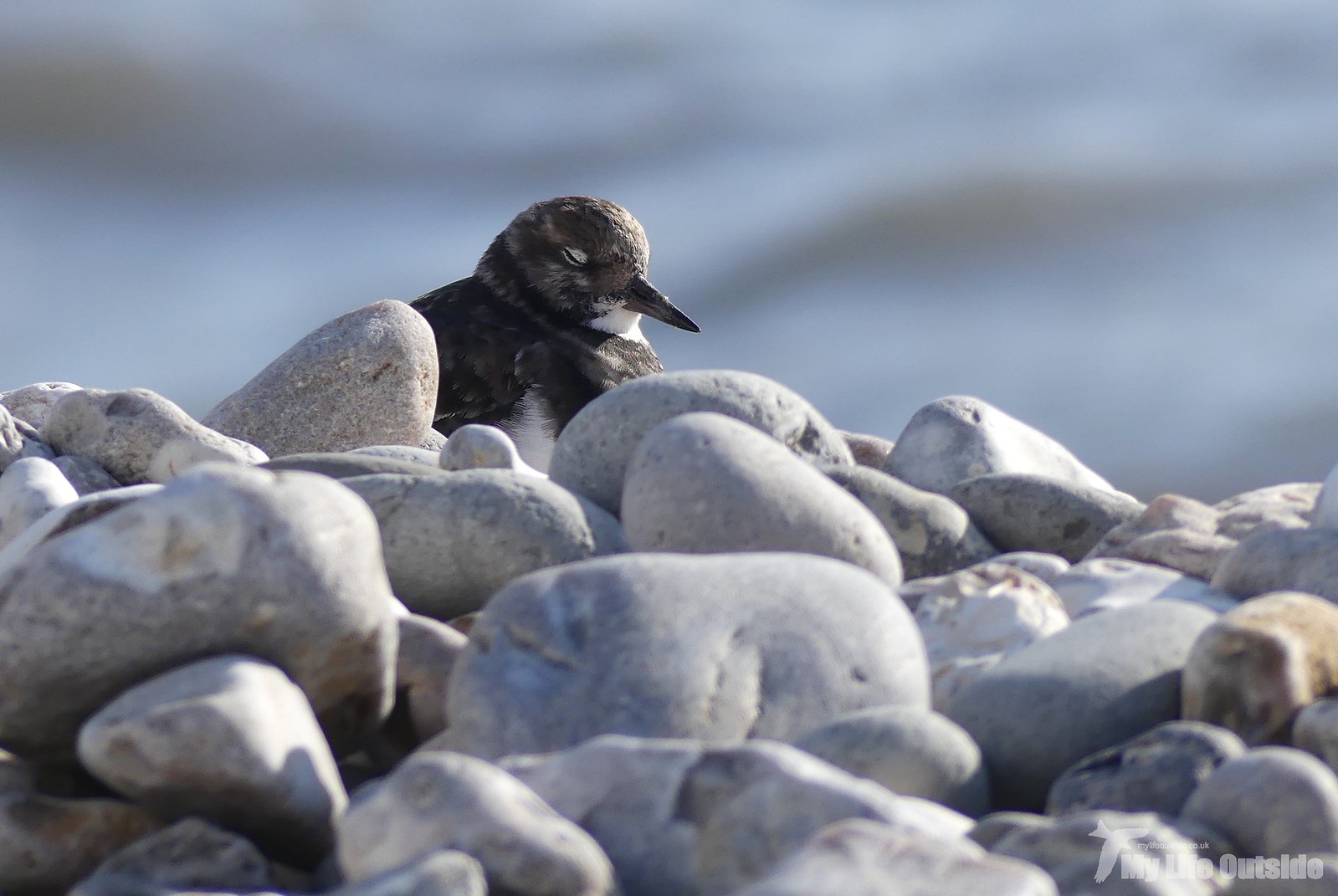 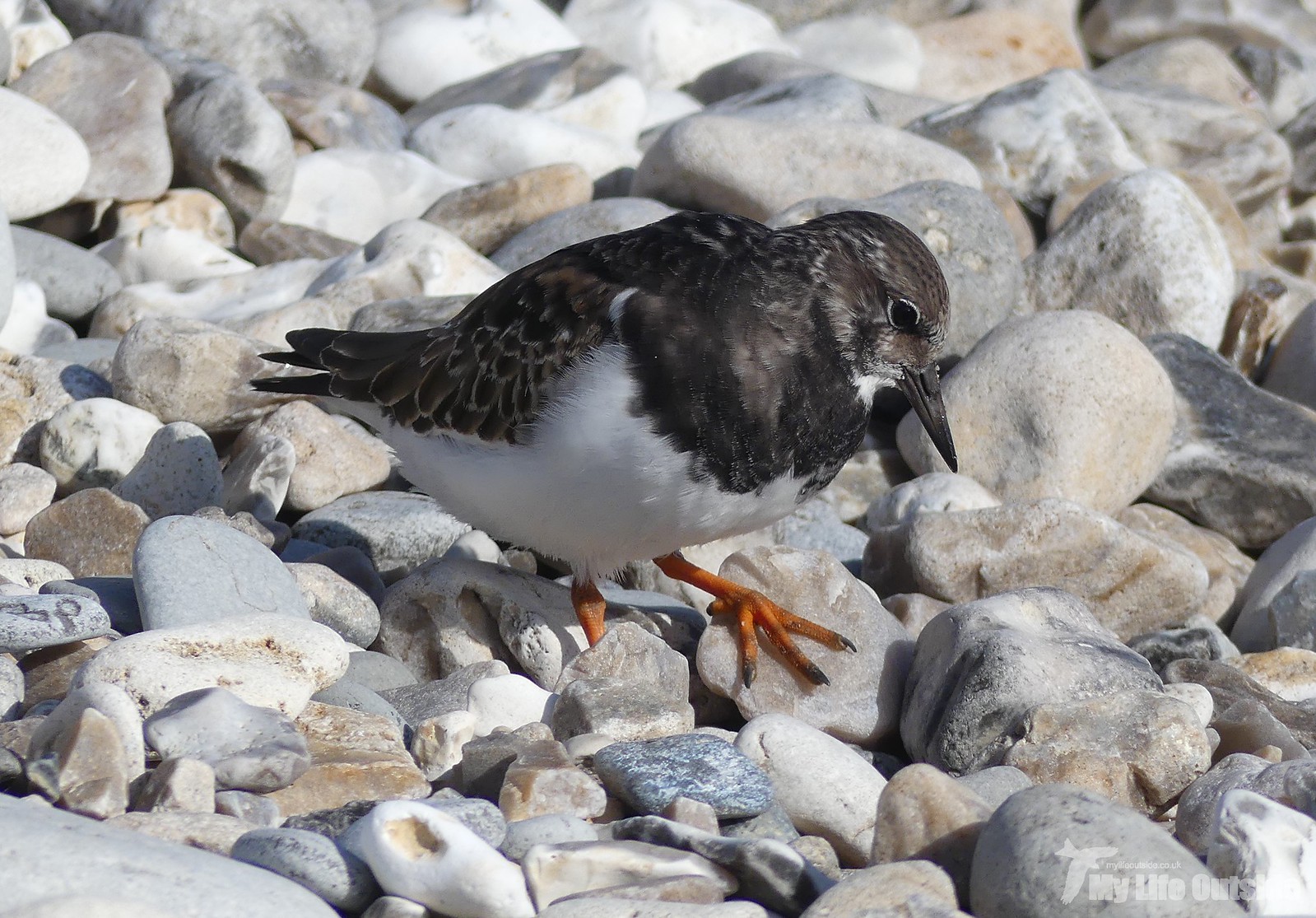 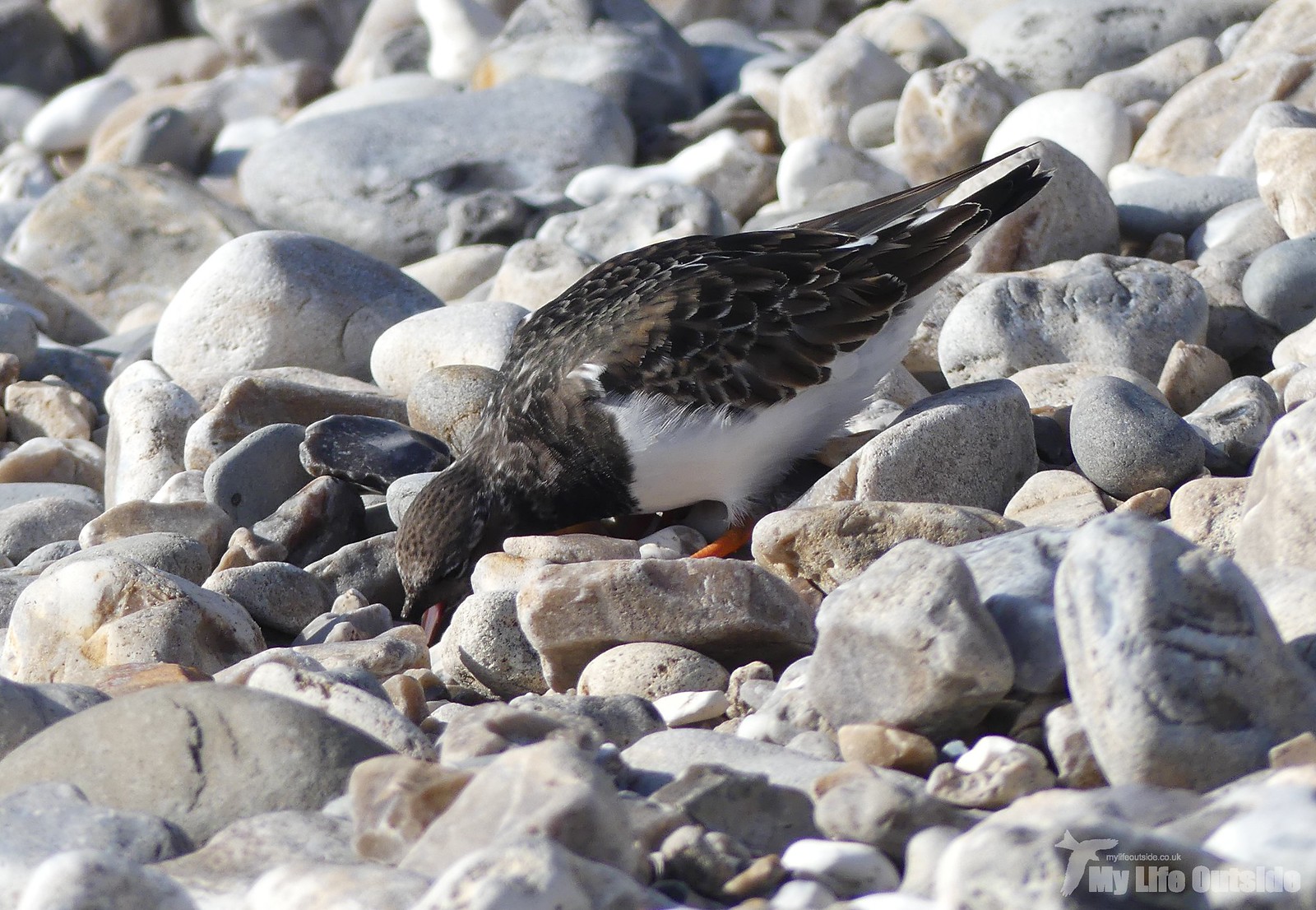 Even the resident House Sparrows and Rock Pipits were up for a few photos with stored fishing tackle making for some colourful backdrops at times. 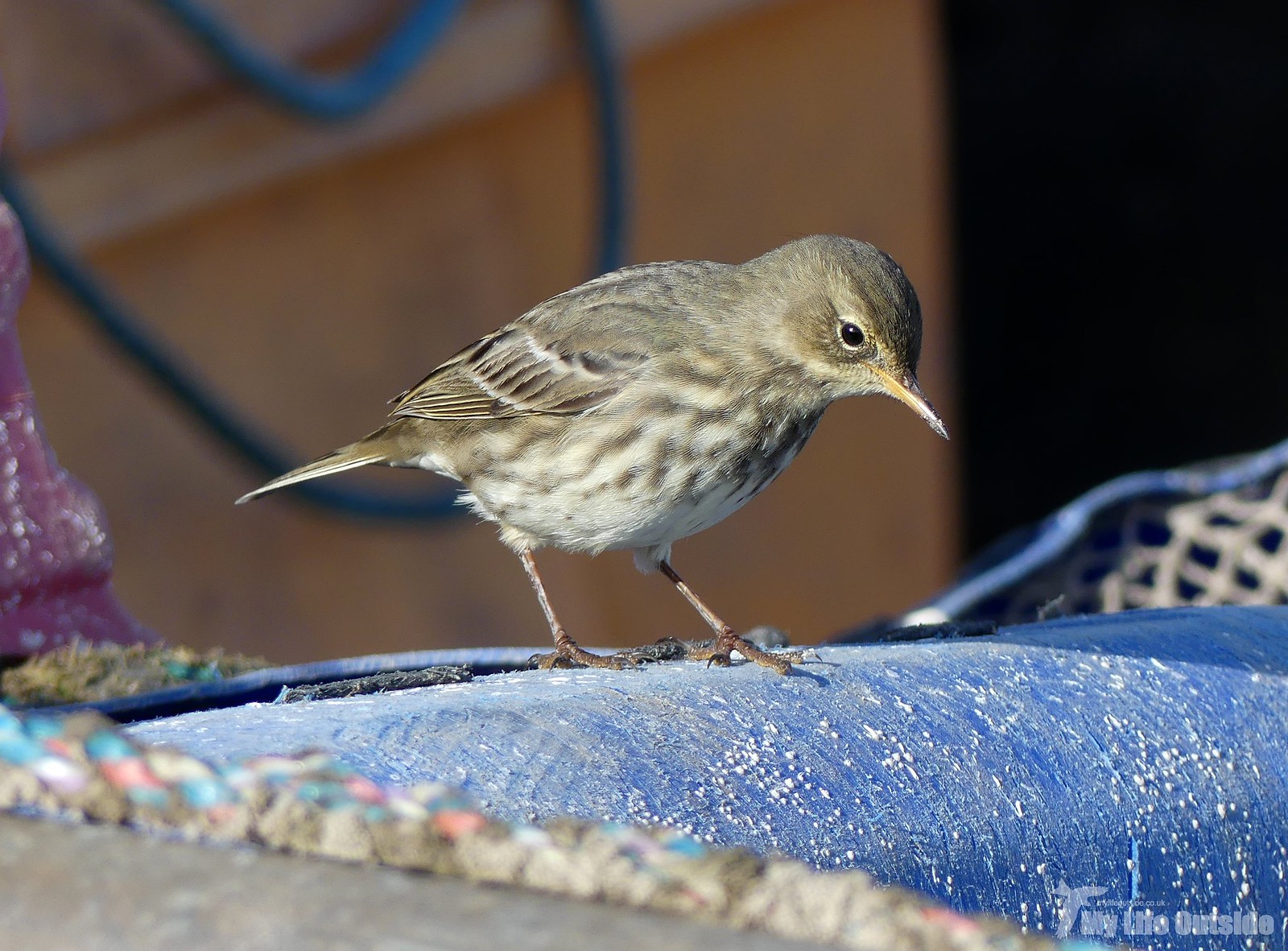 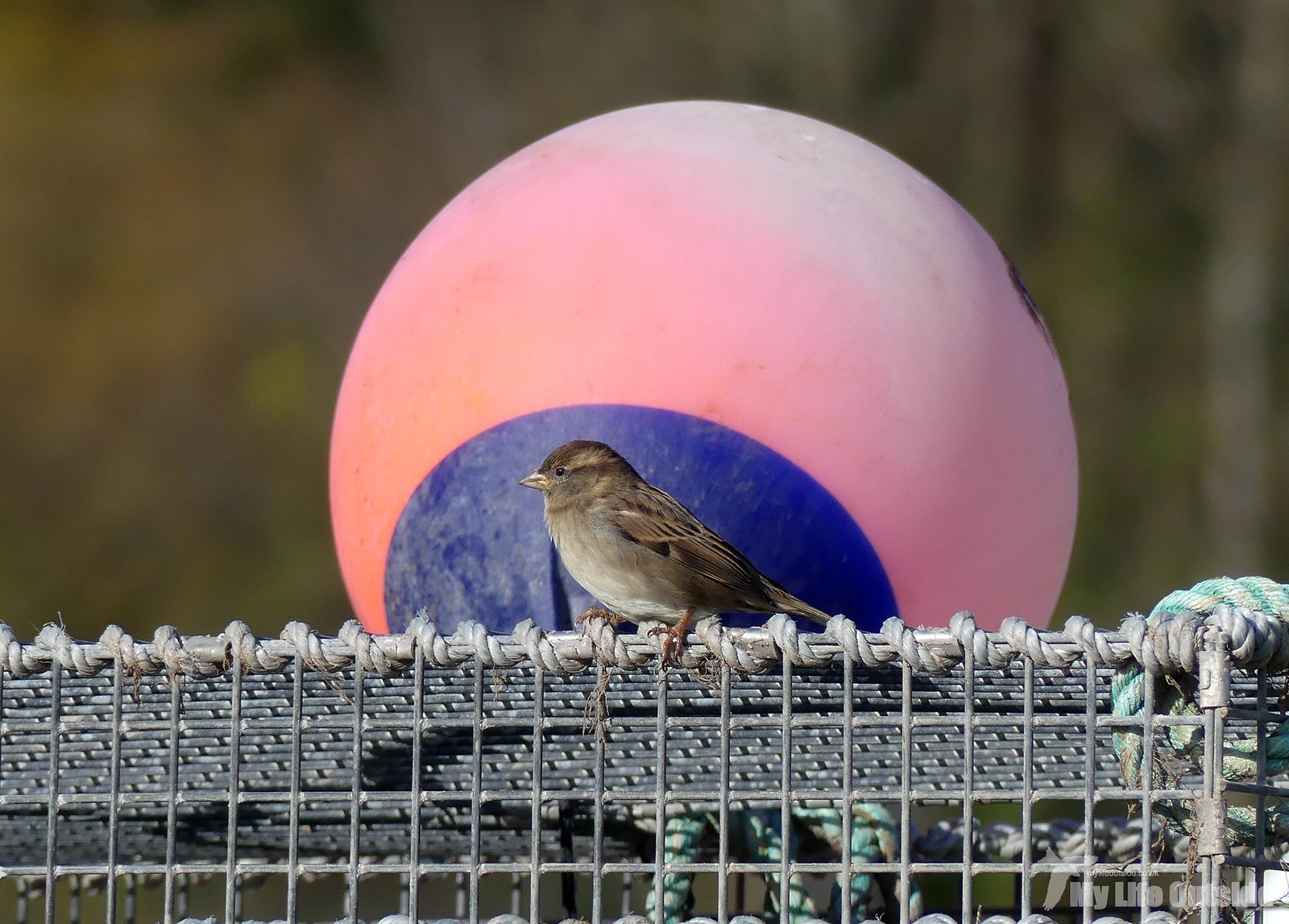 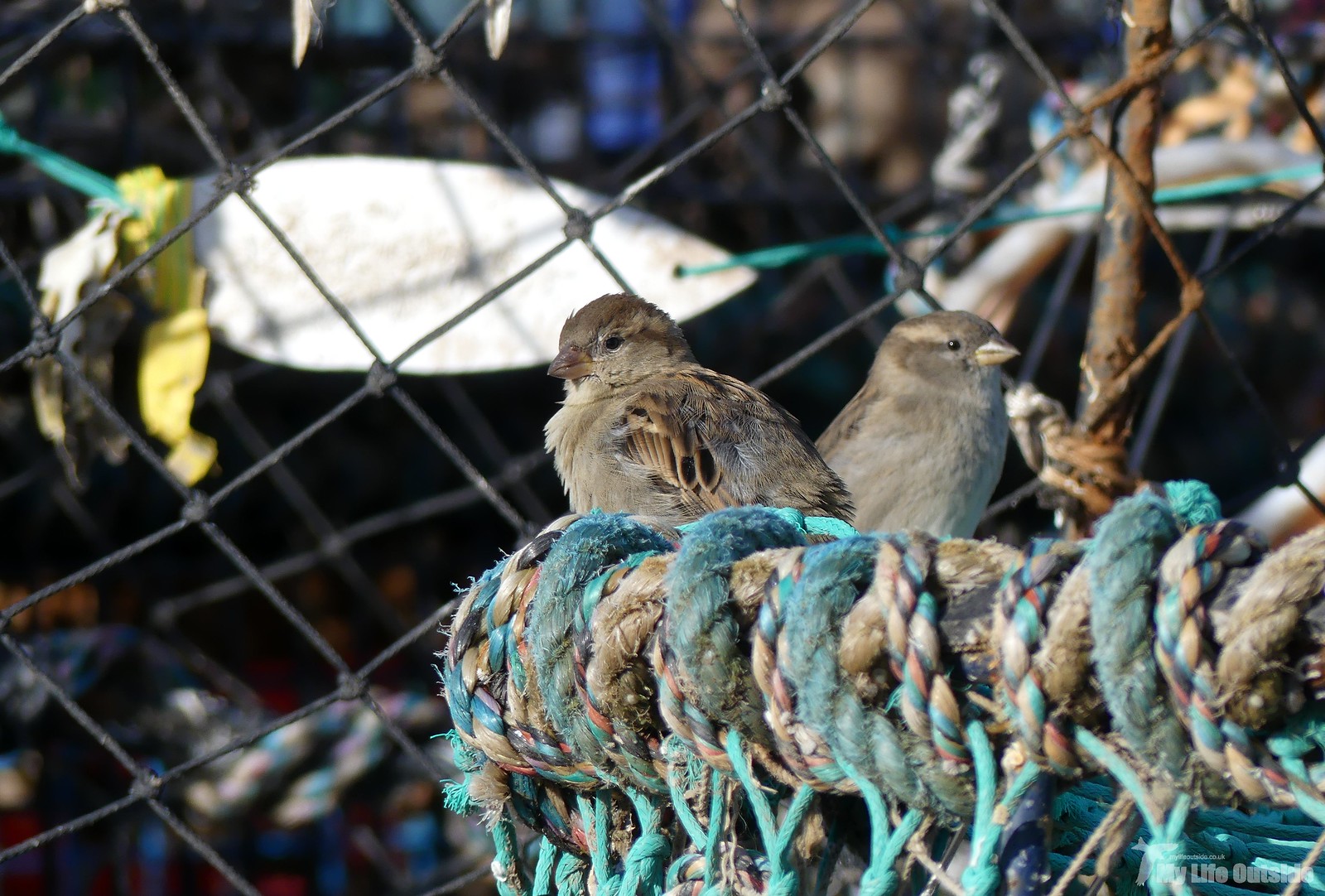 By now the morning was wearing on and with it came the scourge of fellow tourists. Not that I’m anti-social you understand but sometimes it’s nice to get away from your fellow humans so we hot footed it a few miles along the coast to Seaton Wetlands. Sadly the sunshine didn’t come with us. Black Hole Marsh though was teeming with birds including good numbers of Lapwing, Shelduck, Dunlin, Redshank and a lone Black-tailed Godwit. Out on the estuary the Wigeon flock had relocated to a position just offshore before a fantastic Kingfisher decided to perch just downriver from tower hide. We were treated to a couple of successful dives and normally I’d include a record shot here for posterity but much better views were to come. Before that however the steadily darkening skies finally decided to dump their load and we were caught in an intense albeit brief downpour, followed shortly after by one of those rare rainbows that is so intense that you could almost reach out and touch it. 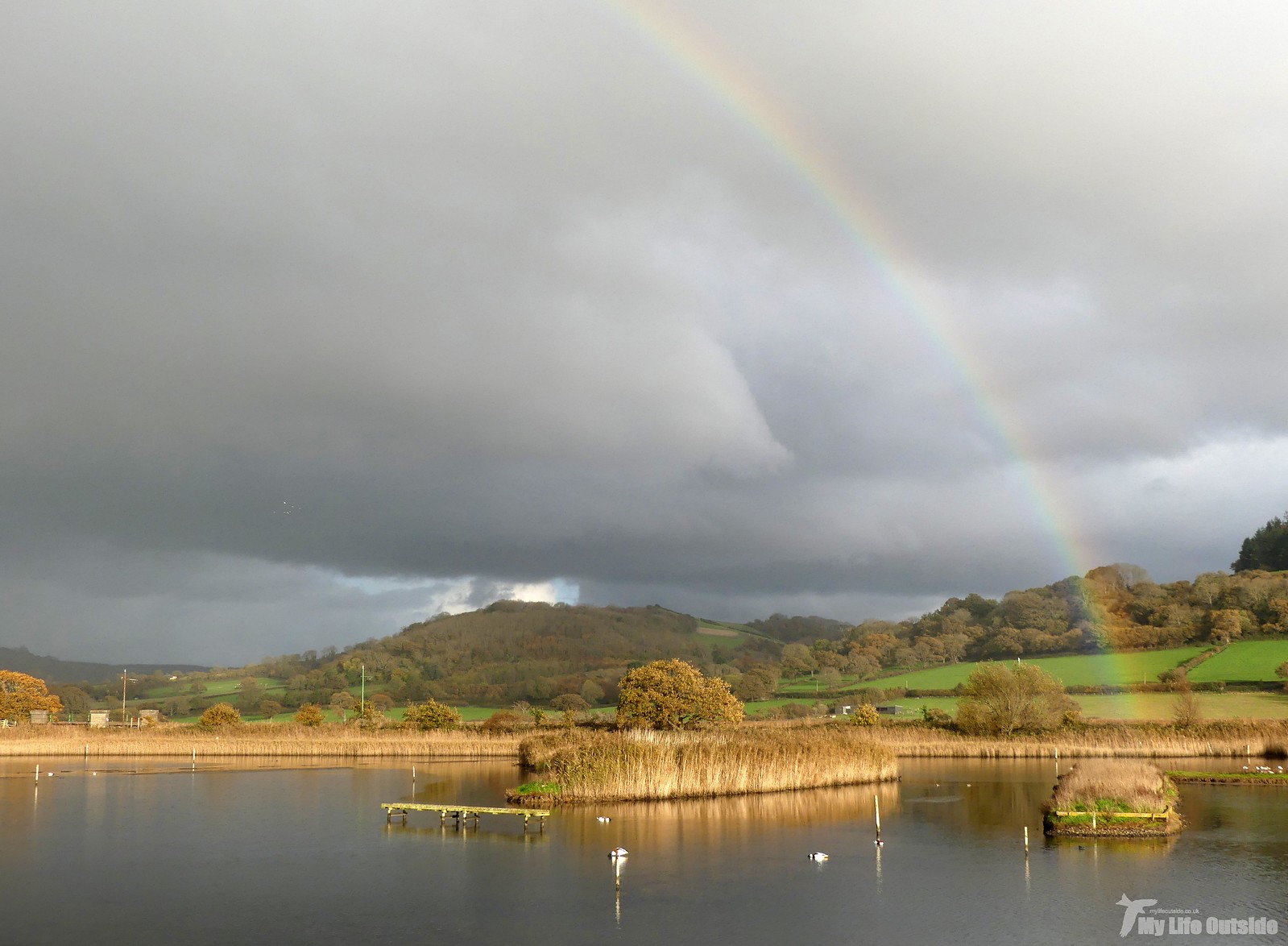 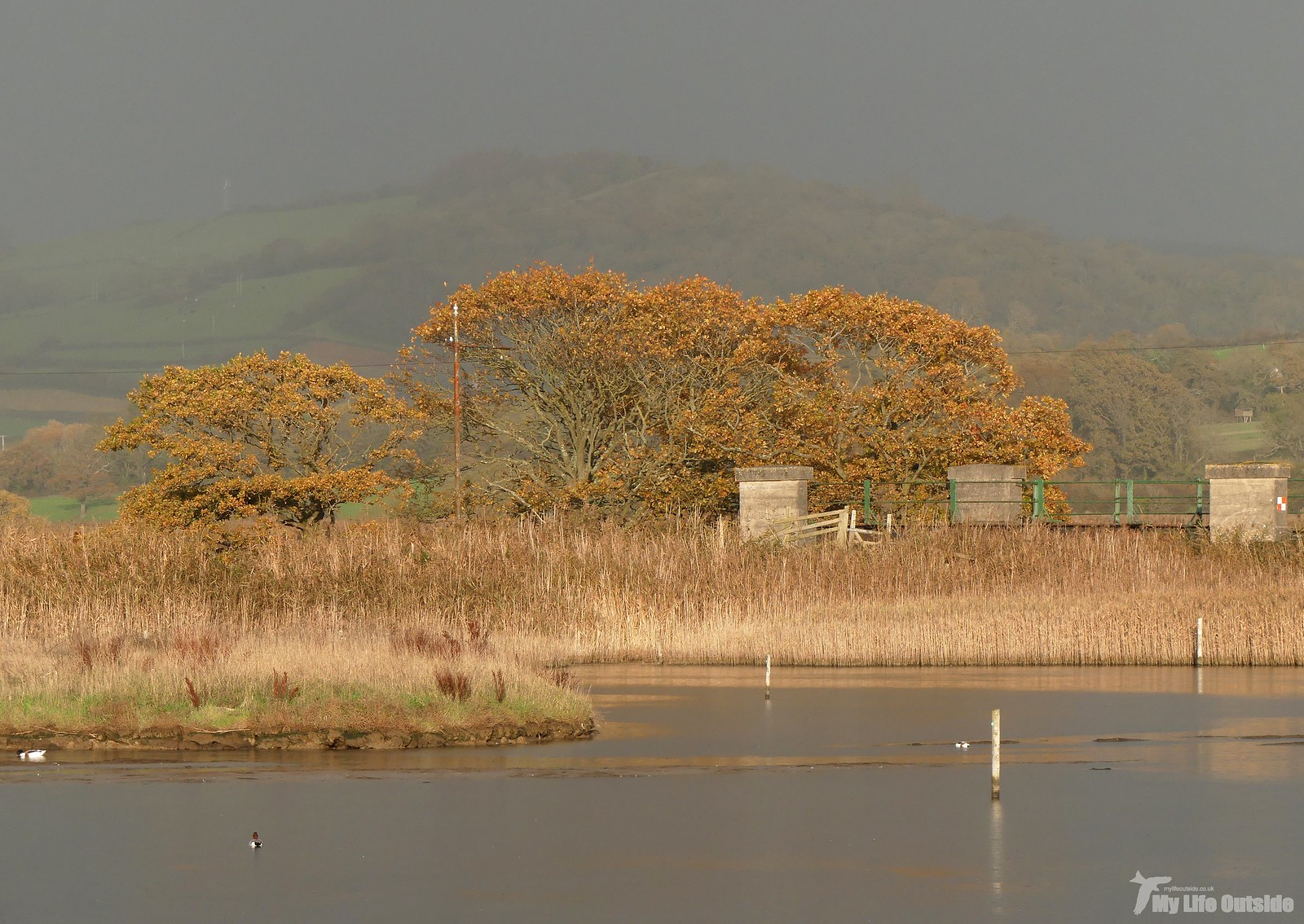 Incredible lighting and a perfect backdrop to what was about to be one of my best birding moments of the year. Having relocated to the discovery hut we found ourselves alone with an apparently deserted patch of marsh before us (this has I’m sure nothing to do with the hide’s previous noisy residents). Sitting there regretting my choice not to bring a jumper a female Reed Bunting popped up close by. 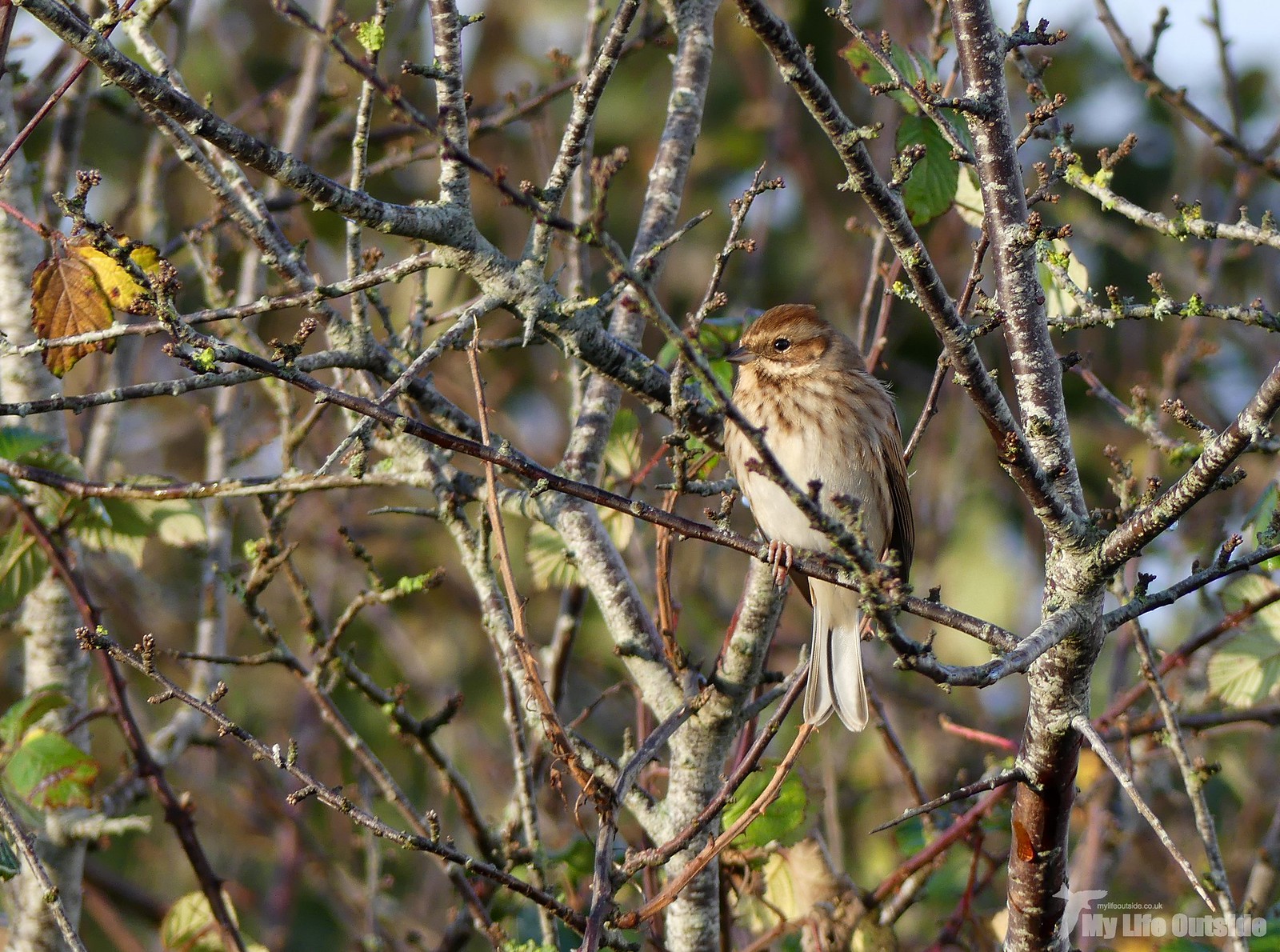 Next came the staccato call of a Cetti’s Warbler which led to unusually clear views of this often elusive bird before the real star of the evening show arrived. Like a streak of blue lightning against the gathering murk a Kingfisher alighted just in front of us and for the next twenty minutes or so dived repeatedly with a near one hundred percent success rate. Each fish caught was brought back to the perch where violent shaking from side to side followed by a flick and a toss signalled game over. I’ve never been so close or had such prolonged views of a Kingfisher before and being able to watch this behaviour was a privilege which still brings a smile to my face now. 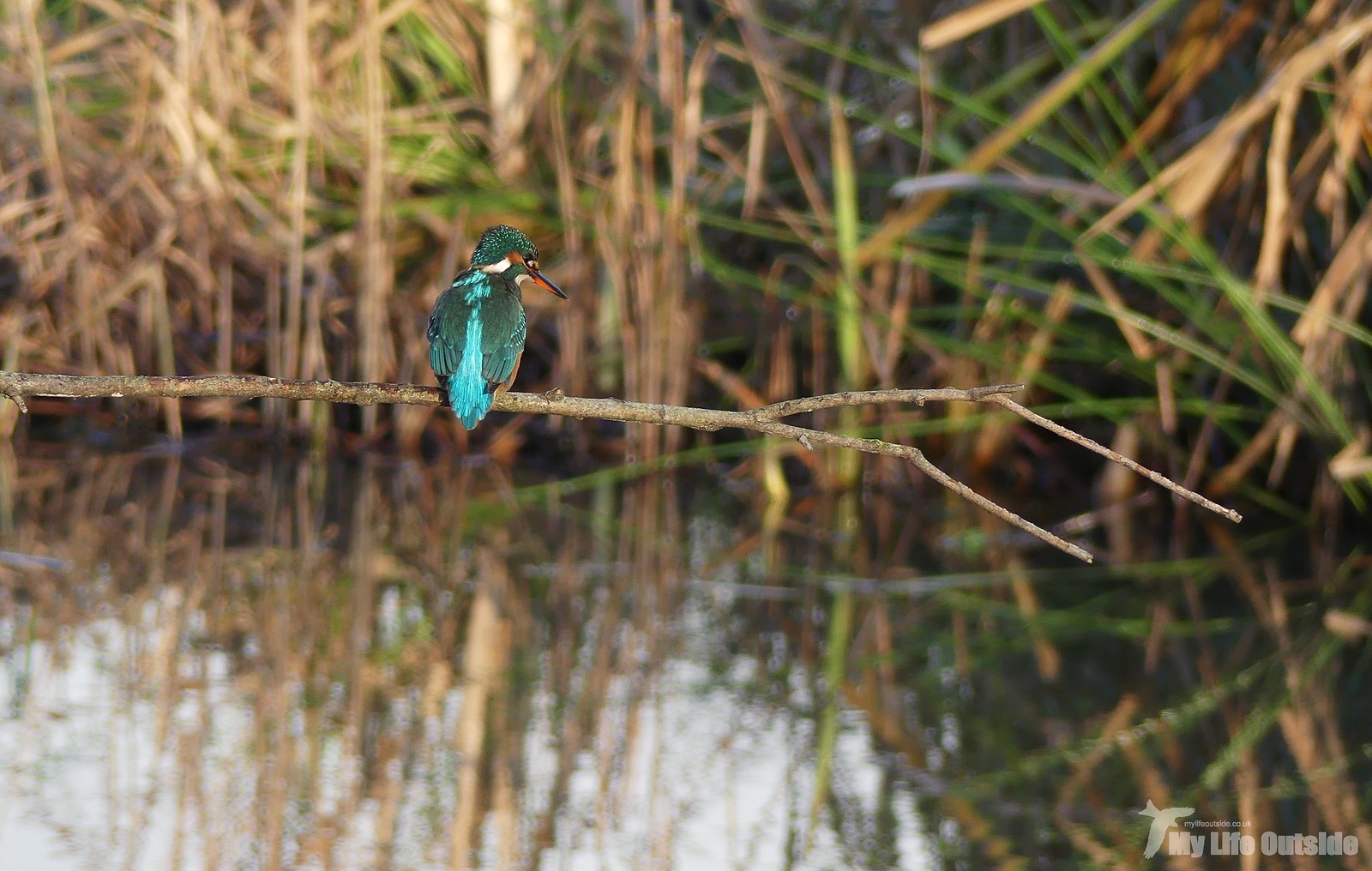 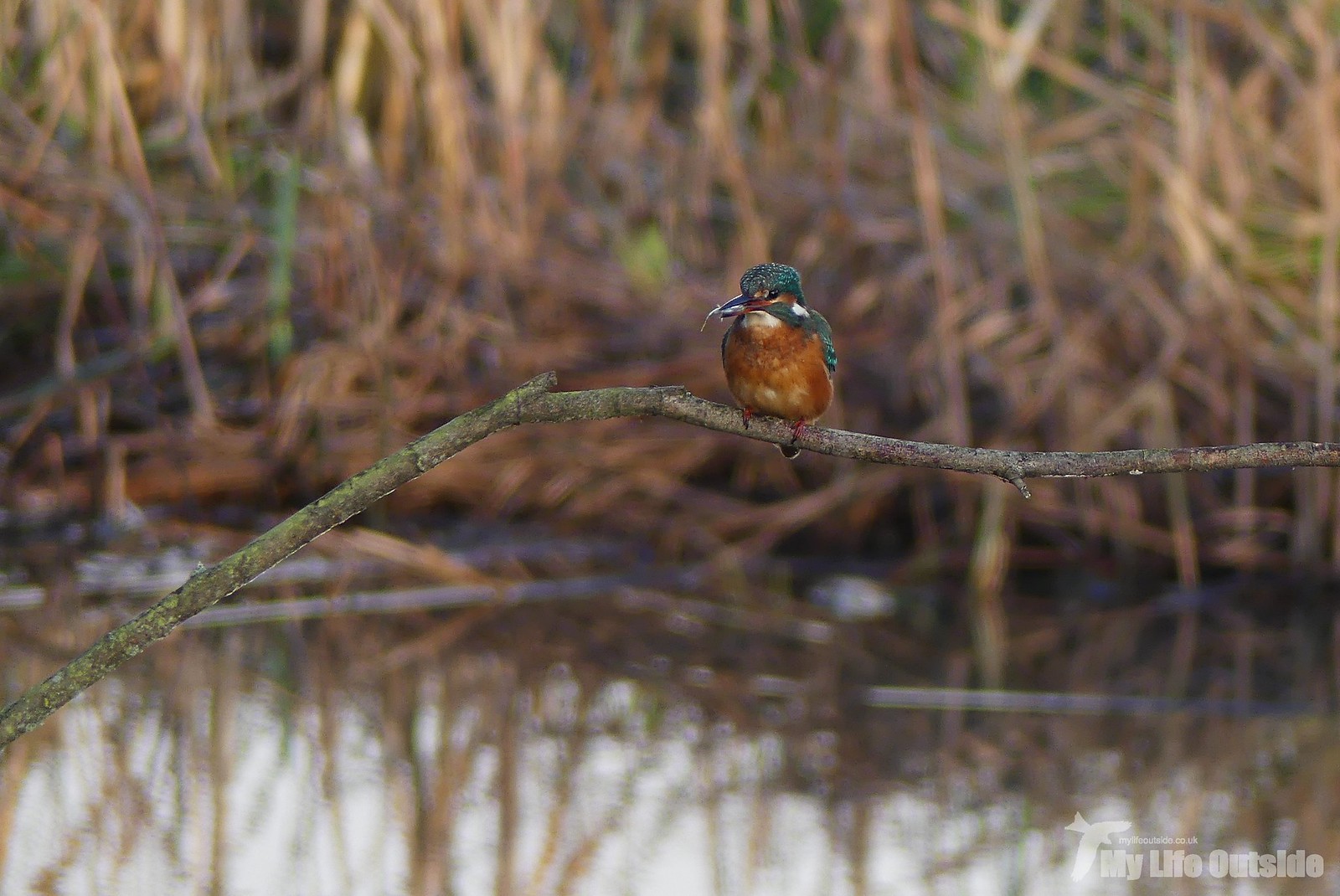 And then there was more! Emma spotted her second Water Rail of the trip and as before I singularly failed to connect first time. Not to worry as at least I knew where to watch yet it was not a Water Rail which emerged next but a Water Vole. It plopped into the water, swam a short distance and then vanished, just in time for the Water Rail to reappear and give excellent views walking along the pool’s edge before it too slunk back into the vegetation. We could scarcely believe our luck.

Our final day in Dorset was spent in the picturesque village of Branscombe, known to most thanks to the MSC Napoli shipwreck of 2007 which resulted in hundreds of containers being washed into the sea. TV images of people wheeling brand new, slightly damp, BMW motorbikes away from the scene were beamed around the world – illegal of course but I guess we should’t be surprised that this island nation still can’t resist a spot of wrecking. Everything was much quieter for our visit other than a movement of several hundred Woodpigeon early on and my first Fieldfare of the year in the old orchard. 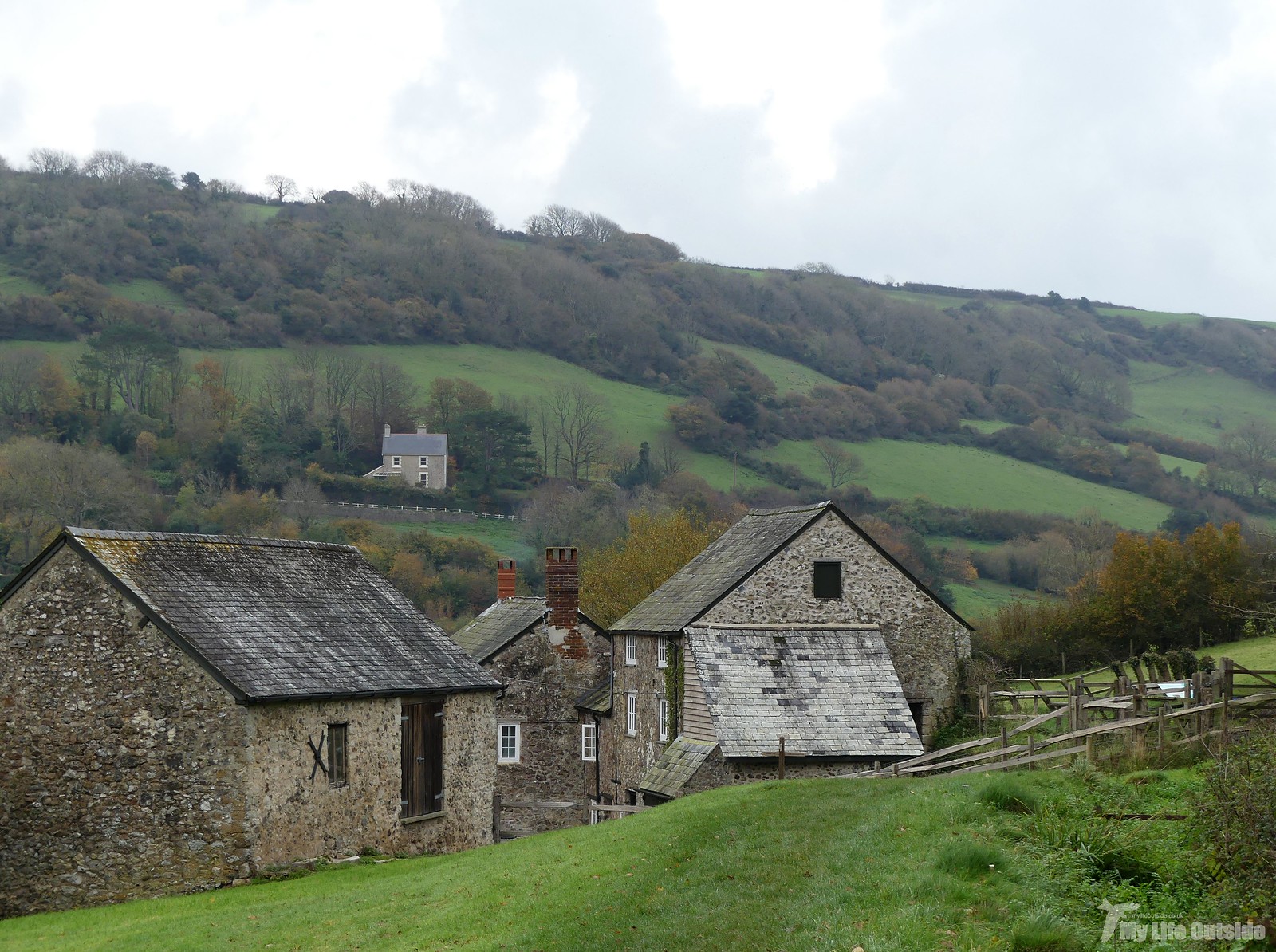 Down at the coast we enjoyed a walk along the Hooken Undercliff towards Beer, a pair of calling Peregrine Falcons being pick of the birds. The unusual scenery here was formed by a huge landslip in 1790 leaving in its wake a tumbled landscape and soaring chalk cliffs. Since then thick vegetation has colonised the space between cliff and sea forming a wildlife haven quite unlike anywhere else. 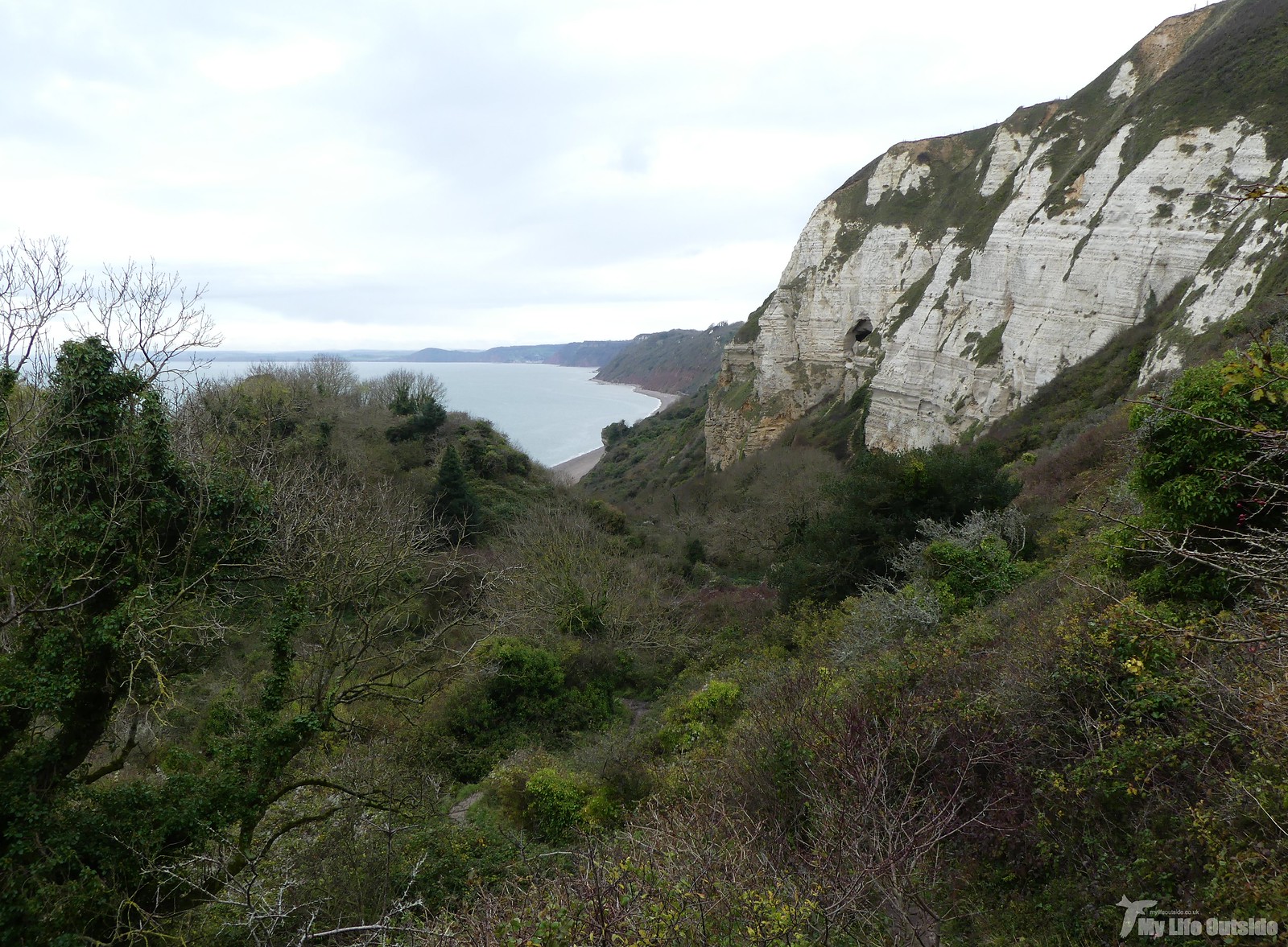 Offshore several Gannets were busy diving whilst above us a couple of Ravens made their presence heard, if not seen.

We rounded things off with one final stroll along the Cobb in Lyme Regis where Eider and Purple Sandpipers alike were still all present and correct. We couldn’t have asked for a better break really and I can’t imagine it will be too long before we are back in this corner of the country.