Yesterday did not get off to the most promising of starts. For a few days previous I’d begun to detect the onset of another winter cold. Nothing too major you understand, just the odd cough and sniffle, enough to let you know that sometime soon, probably at the most inopportune moment, man-flu would strike. Sunday morning turned out to be my ground zero.

Squeezing my eyes shut against the brightness of another unseasonably warm February morning I knew that I was in trouble. Pain arced behind my eyes and a previously undiscovered spring had overnight taken up residence within my nose. I could have dragged this broken body out of bed I suppose but wallowing in self-pity whilst claiming to have been visited by the worst cold ever suffered by a human is one of the few male pastimes which remains steadfastly ours. And that’s how I stayed until well after noon.

I could claim at this point that enlightenment hit me, a sense that wasting a day in such loathing was unbefitting. I could but I won’t. The truth is that I just had to get out with my binoculars. Our little corner of South Wales is bursting with quality birds right now and after missing out on Gower’s Red-rumped Swallow earlier in the week I was determined to make the most of what remained even if I ended up regretting it come Monday. Options included the previously dipped Cattle Egrets at Porthcawl or perhaps even a Great Grey Shrike further west. Tempting both but Kenfig will always hold a special place in my heart and right now it was on top form.

Our last visit to this extensive dune system was on a gale swept January morning with hail storms lashing the landscape, conditions which made holding optics steady an almost impossible task. Even so we still managed to spot the near resident Great White Egret and a good selection of waterfowl, but it was far from the genteel stroll we’d been hoping for. Thankfully yesterday things were a whole lot more accommodating. 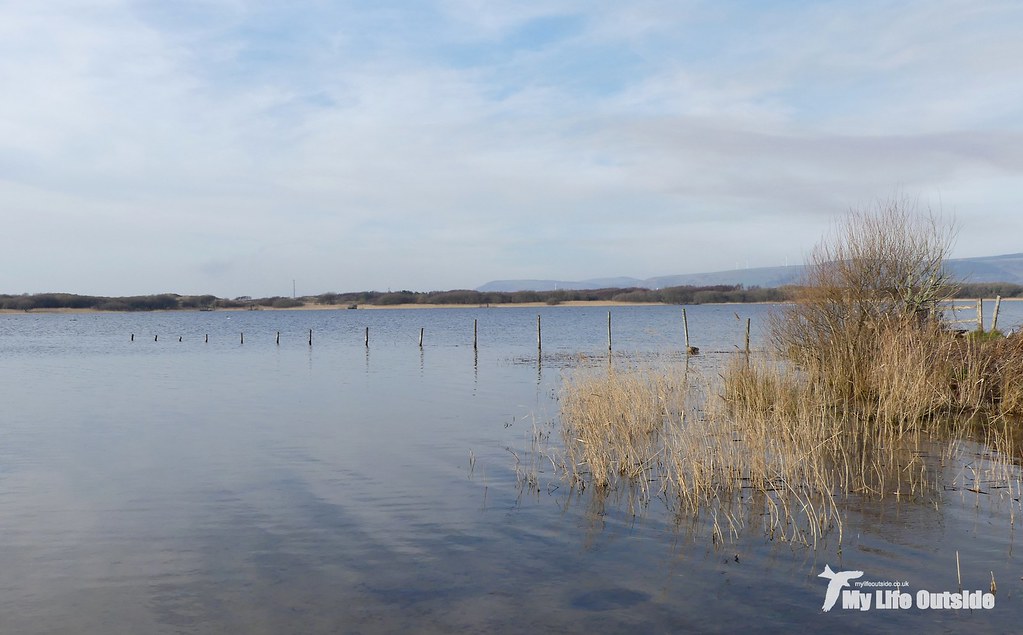 First stop was Kenfig pool itself where despite the unusually mild temperatures there were still plenty of overwintering birds present. Top pick for their striking plumage alone was a quartet of Goldeneye away on the far side though a flock of some forty or so Pochard was equally remarkable and an increasingly rare sight. Other notable species included a couple of Shoveler, displaying Great-crested Grebes, Tufted Duck and Gadwall. What we really wanted to find however was the long staying Slavonian Grebe, a bird we’d dipped earlier in the year thanks to those aforementioned gales and accompanying hail. Small grebes are tricky to spot at the best of times but in near perfect light we were soon eyes on with our quarry. And what a stunning little bird it was too. Still in winter plumage its monochrome colours positively popped, and it would have been rude of me not to at least attempt a record shot. 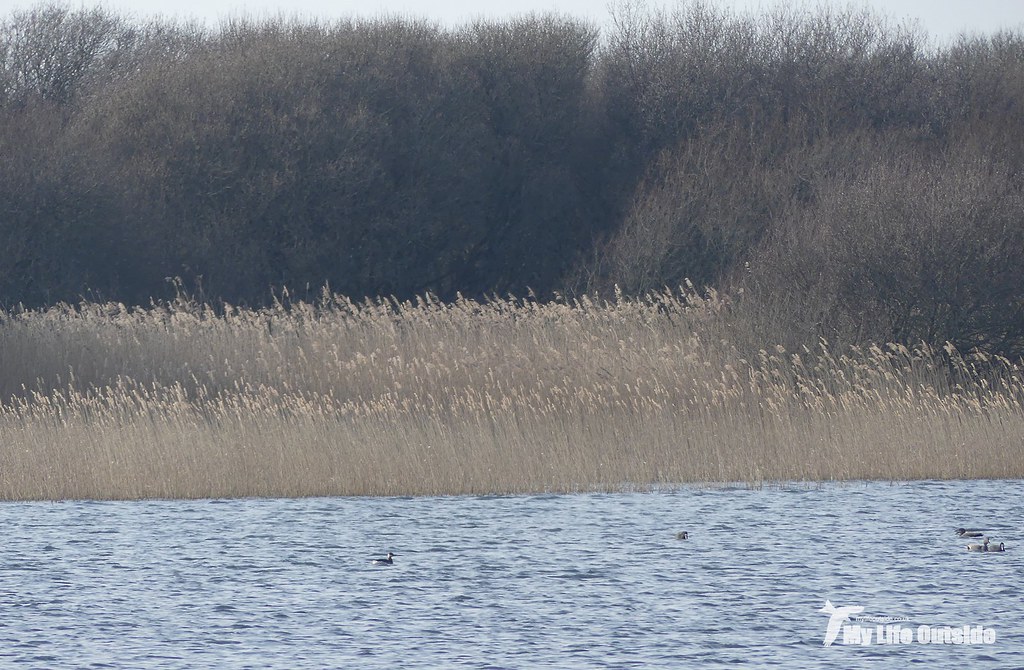 A short distance away and our second small grebe of the day was lying in wait, this time of Black-necked variety. Now whereas I’m very familiar with Slavonians thanks to our regular trips to Mull I can recall only seeing one Black-necked Grebe previously, coincidentally from this very same pot. That individual always remained distant so it was brilliant to get some decent views this time around whilst providing an ideal opportunity to compare the two species. Superficially similar the main difference I picked up on was the extent of black colouration to the cheek. Whilst the Slavonian is relatively clean with a clear line of demarcation just above the eye, the Black-necked shows black extending well below the eye. Useful to know and of course, another record shot had to be included here for posterity. 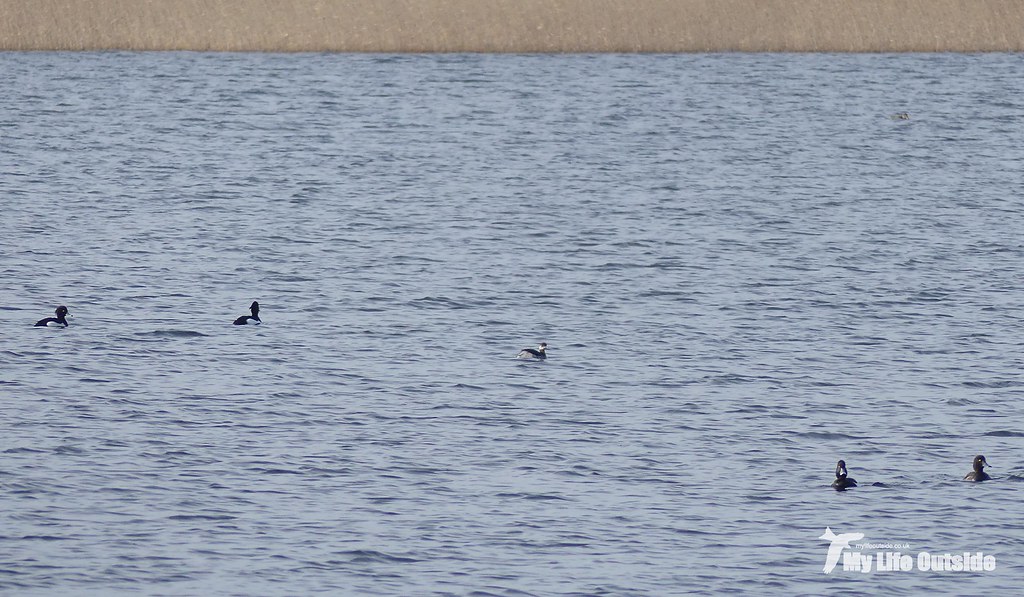 Not a bad little haul I’m sure you’ll agree but we still had one more ace up our sleeves. The previous couple of days had seen reports of Short Eared Owls quartering the dunes before dusk and well, that was an opportunity I just couldn’t pass up. Heading out we spotted a trio of Stonechats before taking up position on a likely looking dune, other birders having done similar at key vantage points across the reserve. We had brilliant views in all directions from coast to steel works and beyond. All we needed now were the owls and wouldn’t you know it, one popped up almost immediately. Initially hunting off to our left it drifted across to be joined by a second with the briefest of encounters before each went its separate way. Meanwhile a third individual had appeared from the undergrowth with all three birds visible in the air at once. What followed was a spectacular showcase of nature at its very best. Each owl almost seemed to be taking it in turns to put on a display, alternating between high flight and low-level hunting. We saw at least one successful kill with the victor perching on the ground some distance away to eat, head swivelling continuously ever on the lookout for danger. 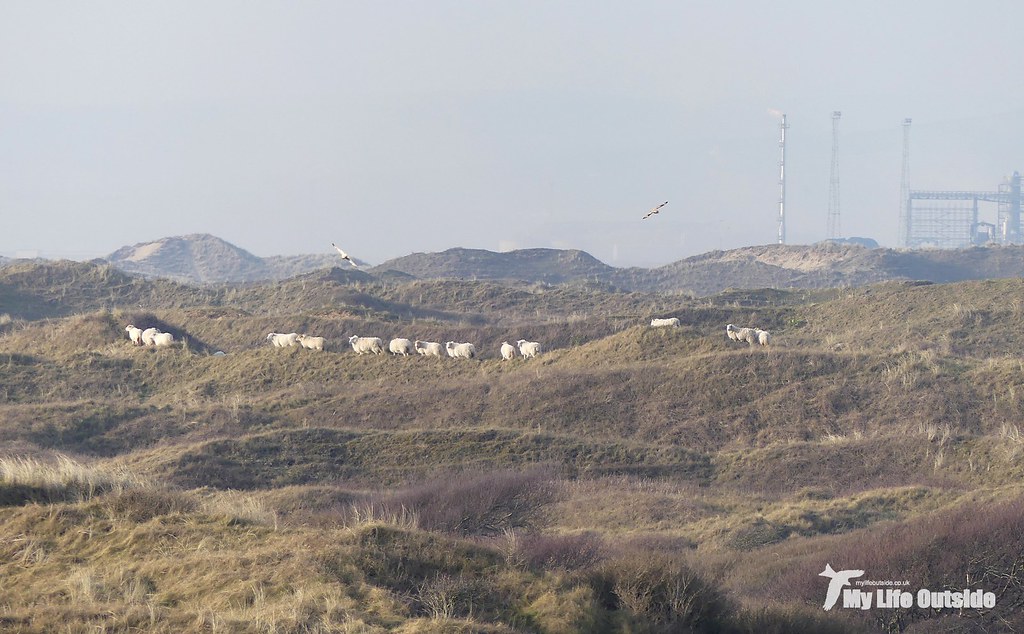 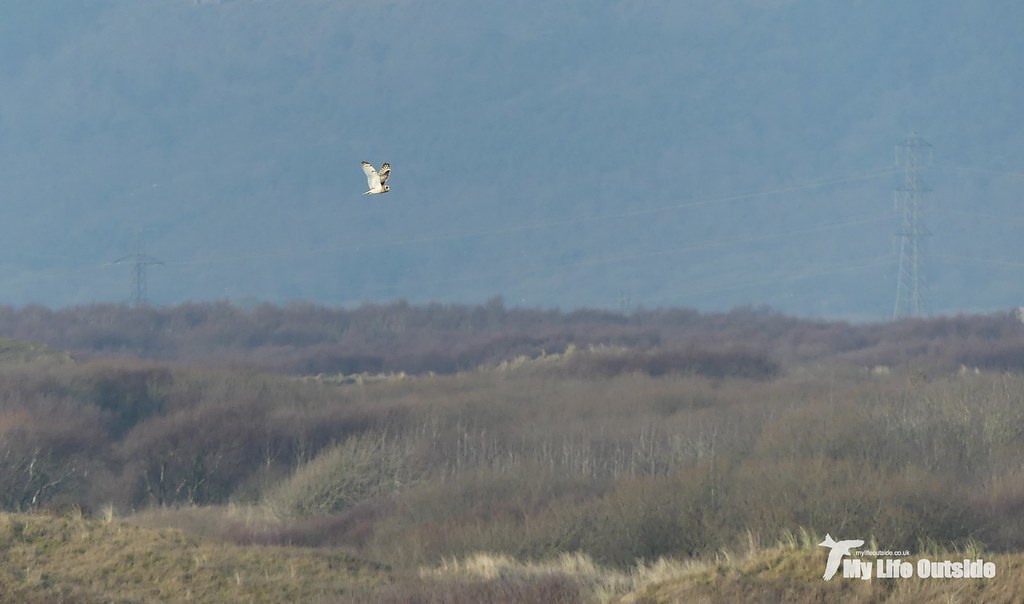 It was right to be wary as a Sparrowhawk shot through beneath our position not long after, sending the nearby Meadow Pipits into a frenzy. A period of inactivity followed with all birds having gone to ground but after half an hour or so they were back. We got more spectacular views though with much of the earlier light now gone photographic opportunities were rather limited. Even so just sitting there and watching mother nature at her very best was a truly special way to while away an afternoon. So much so in fact that it was a real wrench when we finally had to leave but with the temperature dropping rapidly and my briefly forgotten cold now returning with a vengeance it was the only sensible option.

For a day that had started out with such little promise I could never have imagined how it would finish. Once again Kenfig had delivered big time.

I hope the spring sunshine will kick that cold virus into touch, Adam. We drove past Kenfig so many times during our 20 years in Swansea but never actually went 'to' the reserve, which seems such a shame, particularly in the light of your sightings. I would love to see a Short-eared Owl!