The Cotswold Water Park as a whole is not somewhere I’d describe as truly wild but amongst its one hundred and fifty lakes there’s plenty of wildlife to be found and a number of excellent nature reserves worth exploring. Formed as a by-product of gravel extraction the numerous pits left behind have been allowed to fill and thanks to careful management now provide leisure and recreation facilities for thousands of visitors each year. Our association comes as a result of the park’s rather handy proximity to RAF Fairford, home each summer to the royal international air tattoo. After a couple of year’s break we were attending once again and with Saturday free we had a ready made destination literally on our doorsteps.

With temperatures still troubling the low thirties a walk of any length was out of the question so instead we settled on a four mile loop taking in a couple of lakes and sections of both the long abandoned Midland and South Western Junction Railway and Thames and Severn canal. Setting out from the gateway visitor centre I was again struck by the sheer number of butterflies on the wing which surely must be having a very successful season. As before however most were reluctant to land and I was definitely in no mood for the chase. Instead we enjoyed our surroundings as we headed out along the tow-path but of the canal itself there was no sign. Where previously there’d been open water we now found a dry and overgrown channel, no doubt suffering due to the recent heat wave but surely in need of some ongoing maintenance as well. It was particularly upsetting to see a number of dead Pike in the old lock at Cerney. Last time we passed this way I photographed one of these beasts but sadly it looks like a lack of oxygenated water has done for them.

All however was not lost with plenty of new life also taking advantage of the canal ecosystem. First up was a Dunnock with beak stuffed so full of grubs that finding food, at least where insects is concerned, is seemingly no hardship at present. That was followed closely by the surprise appearance of at least one juvenile Redstart! Away from the Welsh forests which I normally associate with this species I had to do a double take but there it was and true to form remained frustratingly distant throughout.

Other notable bird sightings included a lovely Goldcrest feeding in the tree canopy above our heads whilst we sought respite from the blazing sun as well as three Red Crested Pochard on what I think is referred to as lake six.

Along the way our route skirted a still active gravel quarry resulting in what must rank as one of the most impressive styles in the country. Made of metal is passes above a conveyor belt which sadly wasn’t in action today.

Our afternoon was spent walking the arrow straight route of the Midland and South Western Junction Railway. Closed in 1961 as part of the brutal Beeching cuts today it provides a tree lined wildlife corridor sweeping right through the park. Now I love exploring old railways, imagining what they must have been like in their heyday and seeking out any relics that still exist. Usually such searches peak at period fencing and the occasional sleeper but here we were blessed with three stunning brick built bridges. Each carried minor roads across the line although you’d be forgiven for thinking that they served a much greater purpose given their manner of construction. All are multi-arched with inset stone detail with the one at South Cerney even being built on a slight curve. What really fascinated me most though were those arches, each support being cut through with oval openings rounded at top and bottom. I’ve not seen anything quite like it before.

My research since has drawn a blank as to any firm reason why this design was chosen but my own guess is that it was to allow water to pass through. Although all was dry today this entire area acts as a giant floodplain and with such large structures cutting across it makes sense not to impede that water wherever possible. The fact that the ground beneath is incredibly silty perhaps lends weight to my hypothesis. 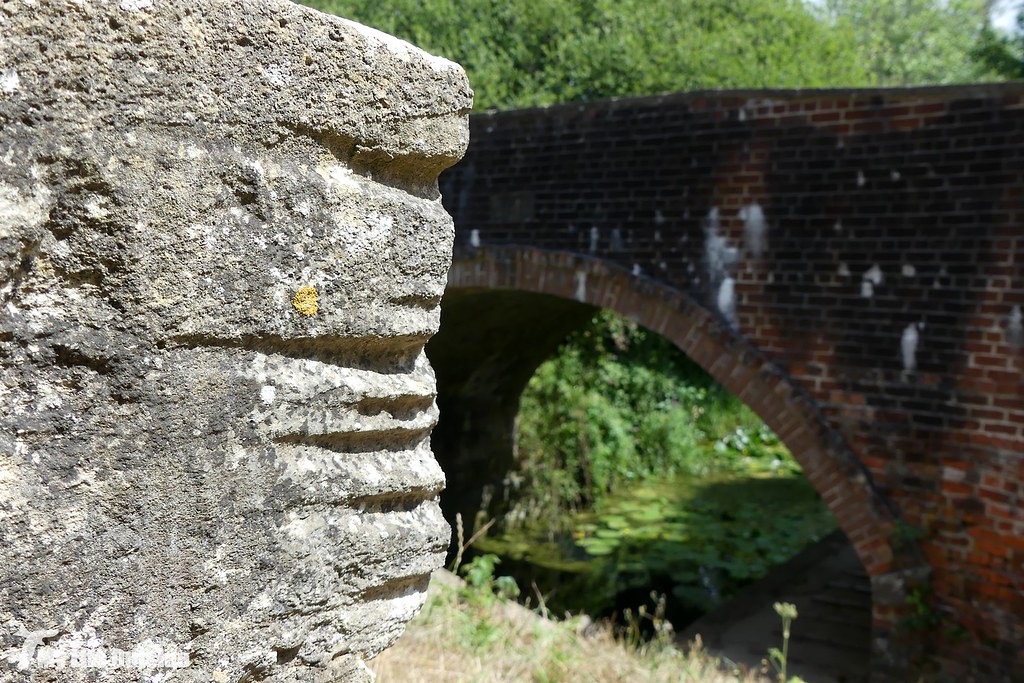 We rejoined the canal briefly before heading back to base where there was nothing for it but to wait out the heat of the day, only venturing forth once conditions has cooled considerably. Ambling around a couple of smaller lakes early evening we were rewarded first with a Common Tern hunting before a family of Great-crested Grebes swam into view. Peeling off one of the adults headed directly for us and proceeded to fish a few metres from shore. Popping up a moment later with fish in beak I just had chance to grab a couple of images before it swam away to feed its young.

That night I dropped off to the sounds of distant Oystercatchers and a Black Headed Gull on the roof of our static caravan. Maybe not the height of luxury but exactly where I wanted to be.