Quite why it’s taken me until Birdfair’s thirtieth year to put in an appearance I’ll never know but, in the words of those great philosophers i.e. our mothers, better late than never. For those who may be unfamiliar with the event it’s essentially Glastonbury for birders with hundreds of talks and lectures spread across three packed days, not to mention stalls from just about every country, tour guide and wildlife related company that you could possibly imagine. Year after year I’ve watched others on Twitter sharing their latest selfie with Chris Packham or waxing lyrical about a presentation which I’d have loved to have attended and finally, it was my turn. Although I’ll pass on the selfies if that’s ok. Probably better for all involved.

Birdfair’s base of operations is the fantastic Rutland Water nature reserve which, for anyone with even a rudimentary grasp of geography, is a whole lot of miles away from South Wales. Travelling each day then was clearly out but we managed to find a lovely campsite a short distance from the venue which offered the three absolute musts for a quality canvas based venture – hot showers, flat pitches and sheep. Yes it seems you can take this couple out of Wales but we’ve been here so long now that stepping out each morning to the expectant (for what exactly I never did fathom) faces of a flock of sheep was just what we were after. They weren’t the only animals present either with Angus cattle in the next field, Red Kites low overhead and what surely must be the palest Buzzard I’ve ever seen. For two straight evenings it sat atop a distant tree, temptingly resembling an Osprey but never making the grade upon closer inspection.

At this point I should probably include a photo of our camp but must admit that I came away rather light on images. Plenty on the phone as I sought to share my experiences in real time but not really of a suitable quality to share here. Instead what about a shot looking across Rutland Water itself from one of two brief visits we managed to make out on to the reserve. 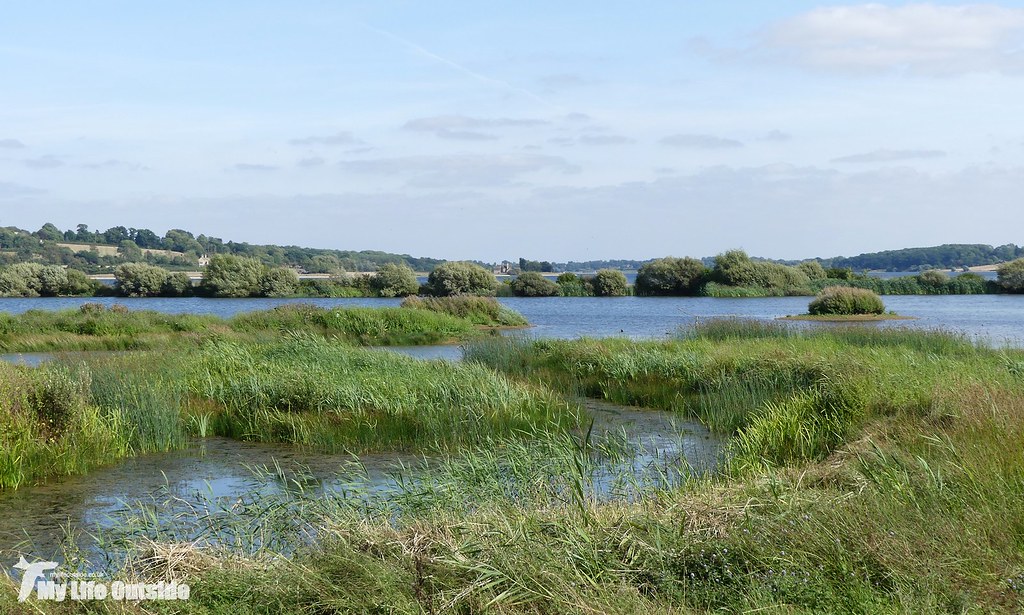 And what was the cause of such little actual birding I hear you ask? Simply too much else to see.

When booking our tickets we had originally thought that one day might be enough but oh how wrong we would have been. Nothing quite prepared me for the scale of the place and with four lecture theatres, two event marquees and no less than seven huge trade marquees, we really were spoiled for choice. Thankfully I’d picked up a program a week or so earlier and had been able to highlight the talks that interested me most but even here there were clashes galore and I didn’t get to see probably half of what I’d intended. A lot of that had to do with the trade stands which saw me buying a book all about the birds of the Falkland Islands within ten minutes (they were such lovely people) and a new pair of binoculars within the first hour. Thankfully for my wallet that pace of spending was not to last and other than a few New Naturalist titles and a significant number of RSPB pin badges (I knew they were going to be a slippery slope) I managed to escape still vaguely in the black. For how long though is anyone’s guess as we have holiday brochures from around the world which will no doubt provide hours of escapism over the winter. Rather worryingly Emma has her eyes most keenly set on a cruise along the Norwegian coast so if anyone has next week’s winning lottery tickets I’d be much obliged.

On the wildlife conservation side we spent some money with the RSPB (it’s those pin badges again), lined up a few projects with Swift Conservation to hopefully get Swifts nesting on our house next summer (and bought one of their pin badges) before picking up a signed copy of the superb Britain’s Spiders handbook recently published by WILDGuides. It was also good to sign up for another of the BTO’s surveys after being a contributor to the last Bird Atlas, this time looking at the distribution of Tawny Owls. I’m sure they’d planted the two at our campsite just to seal the deal. The National Trust were keen to tell us of their increasing focus on conservation which was excellent to hear whilst the BTO deserve a second mention for not only giving me my first Reed Warbler tick of the year at their ringing demo but then letting Emma release it back into the wild. 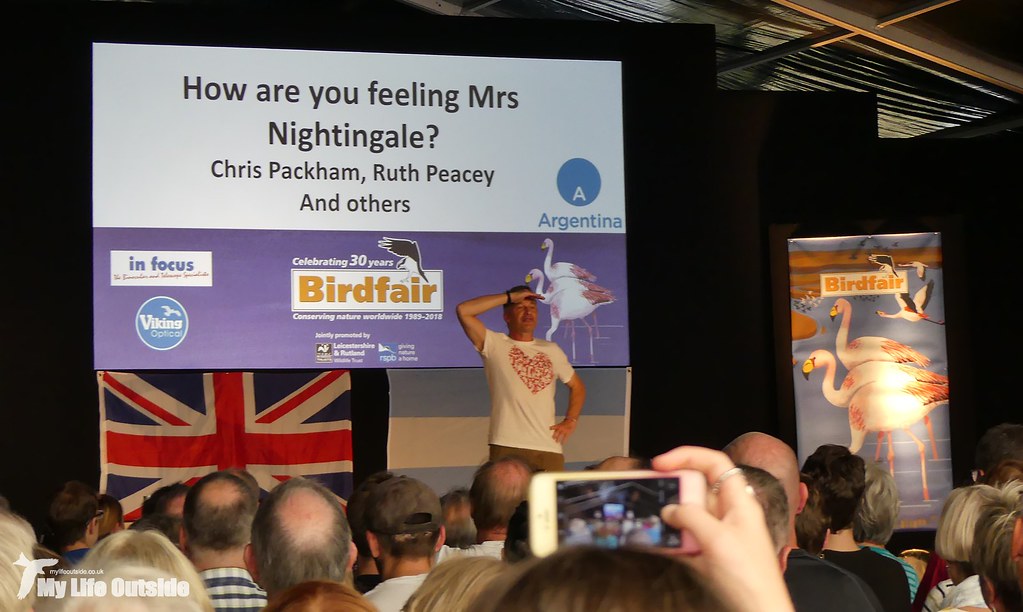 There were plenty of big name stars in attendance including the likes of Bill Oddie, Chris Packham, Simon King, Jonathan Scott of Big Cat Diary fame, Iolo Williams, Nick Baker and Nigel Marven. In fact at times it was as if the wildlife programs I used to watch as a kid had come to life and all gave fantastic, engaging talks covering a wide range of topics that made me laugh, think and yes, even despair. I’ll write a separate post covering this aspect of Birdfair later in the week as some important messages were shared which I want to spread to a wider audience.

Less famous but equally important was my twitter timeline, most of which I spotted walking around in person though apologies for not saying hello but I’m not very good at introductions. Mark Avery was again doing sterling work raising awareness of Iceland and its whaling and it was lovely to meet up with Gil from Wunderbird clothing having conversed by email for the last couple of months.

Do you know what really made Birdfair though? The atmosphere. Everyone we met was smiling and having a good time, from visitors to exhibitors to volunteers. It’s not often that you find such a concentration of like minded people, particularly where nature conservation is concerned which for some reason still seems to be seen by wider society as something a little bit wacky. Thankfully that attitude is slowly changing and change it must as if nothing else sticks with me from this weekend it is that there are some serious challenges ahead. From plastic pollution to disappearing insects to extinction level events, our world is not in a happy place right now. I still feel disheartened and, to be brutally honest, helpless, but seeing people out on the front lines, fighting for every win no matter how small, has been completely inspiring. I spent most of today in a slump, completely lacking in any kind of direction and unsure of what path to take next. It’s only now that I write this somewhat rambling post that a course becomes clear. That is that there is always hope and that every single person has the capacity to be a force for change. If each of us could seize on that the cumulative benefits would be massive. 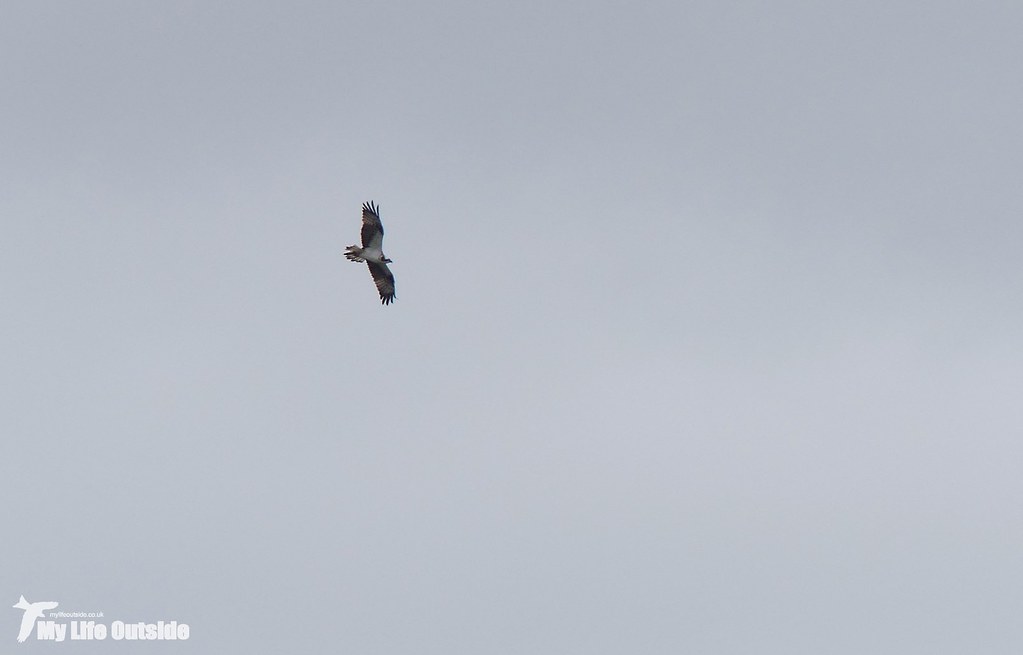 In an attempt to bring this to a close then I guess we need some kind of conclusion.

My first ever Birdfair was absolutely brilliant. We both enjoyed ourselves thoroughly and I feel re-energised, not just for our own wildlife but to go and see what else the world has to offer as well. I also feel a need to contribute in a more active way to our conservation challenges and look forward to seeing where that may lead. Above all though it’s safe to say that this will not be my last Birdfair. Now that I’ve discovered what I’ve been missing all these years I don’t think I’ll ever be able to get enough.

Great post! It was my first time last year, but couldn't get there this year. Out of curiosity what was the campsite you stayed?

Thanks Sandra. We stayed at New Lodge Farm – http://www.newlodgefarm.com/