Last Saturday found us a few miles north of Castle Combe in the south west corner of Cotswold Water Park. Better known for its sporting and leisure activities the area also offers miles of walking routes stretching between several high quality nature reserves. One of these, Lower Moor Farm, is operated by the Wiltshire Wildlife Trust and somehow managed to eclipse the previous days already impressive butterfly haul. In all we saw a total of thirteen species including new for the year Large Skipper and Large White plus a strangely scarce Speckled Wood. The Large Skipper was a particularly nice find and allowed a good contrast to be made with Small Skippers which were also on the wing. I’m pleased to say that my pointers to the rest of the group on this score proved accurate. I must be getting better. There were also large numbers of Small Tortoiseshell and particularly Gatekeepers about which kept us busy well into the afternoon on what turned out to be a swelteringly hot day.

When we weren’t busy getting stung whilst trying to photograph butterflies it was dragonflies providing the distraction. Looking across the surface of each pond revealed a seething mass of activity with Broad-bodied Chasers easily taking top billing in my book. They did however refuse to land for any length of time but I did manage to capture this Common Darter, a couple of Black-tailed Skimmers and perhaps best of all an Emporer. We watched the latter devouring a damselfly of some description but it was only stationary for a couple of seconds meaning that the exact species of prey will have to remain a mystery.

As I’ve remarked before on here, it’s amazing how many different insects turn up once you get tuned in to the vegetation around you. Everywhere we looked revealed something new including two Hornets battling to the death in a pond (the victor did eventually manage to fly away), several species of Bee and by far the biggest haul of Harvestmen I’ve ever come across. Having been on an identification course for these arachnids (though they’re not spiders) last year we’ve both been keeping a careful eye out and would have loved to have spent time trying to key these out. I’ll give it a go from the photos I took some time but don’t hold out much hope!

Also about were another couple of distinctive yet unfamiliar species including a very prominent Black and Yellow Longhorn Beetle and this Dark Bush Cricket. I take full plaudits for spotting the latter nestled deep in the undergrowth, one of two cricket species on the day (the other being a Roesel’s Cricket). 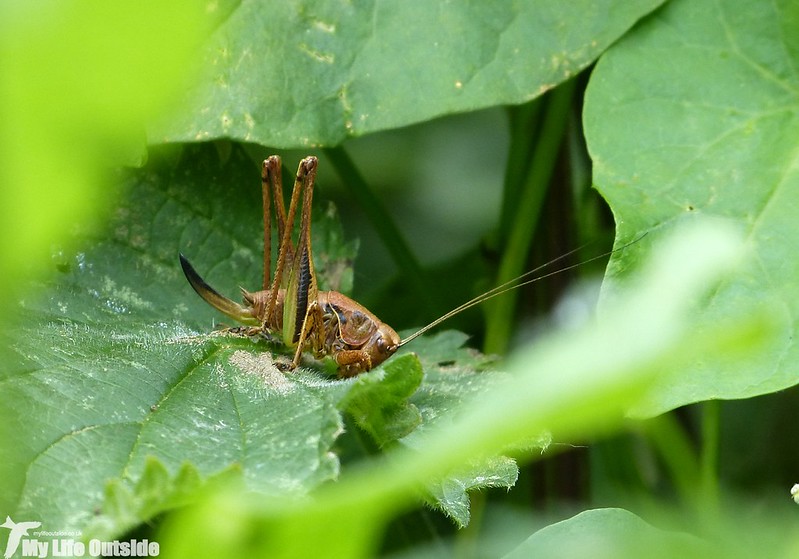 On the bird front things were, as expected, relatively quiet bit we did get great views of a couple of Blackcaps which seem to have been having a very good year if our numerous sightings are anything to go by. There was also a fly-over Peregrine Falcon and two pairs of Common Terns, one chasing the other off and making a hell of a racket in the process. Top sighting though has to go a Water Vole which we watched swim away from us right down the middle of an open stream. The views were easily on par with those at Titchwell a few weeks ago but this time I wasn’t quite quick enough with the camera. Once again it was the distinctive ‘plop’ sound of Vole entering water which was the big give-away to the animals presence, surely a fatal flaw to its normally secretive nature.

Its hard to see a bird in the heat, they are hiding…your butterflies are wonderful, and a good shot of the daddy long legs as we call them.