If you’d mentioned Castle Combe to me this time last week then the only image which would have sprung to mind would’ve been the circuit on classic Playstation game TOCA Touring Cars (still one of the best racers ever made in my humble opinion – it’s a generation thing). I know this because Emma did just that and I suddenly had an urge to drive through a line of pixelated traffic cones. Apparently though Castle Combe is also the self proclaimed “prettiest village in England” and was rather handily located for a days walk on our way to meet up with the rest of my family for this years Royal International Air Tattoo. Even more conveniently the AA of all people have published this route which looked like the ideal way to explore an unfamiliar area of the country. What should now follow then is a series of photos showcasing a quintessentially English village but alas I’m going to have to disappoint. For some reason Castle Combe itself just didn’t quite do it for me. There was a strange sense of falseness, of efforts to retain what charm there once was against an ever changing world. Yes the buildings themselves were lovingly kept with some truly fabulous features but the overall scene was spoiled with acres of tarmac, for sale signs, builders and far too many cars. Pedestrianise the place and I think you’d be back to a winner but right now? Sadly not. In fact the only image I was relatively happy with was this Woodpigeon up on one of the roofs.

Perhaps I’m being a little harsh though as really the village has expectations set for it that are far too high. I’ve been to a lot of very nice places and advertising yourself as the prettiest is a sure fire way to remove any charm that once existed. Thankfully By Brook (a daft name that kept confusing me every time I saw it written down) was much more my scene and as we followed it out of the village we were treated to hoards of calling House Martins overhead, families of Blue Tits and Mallards, two very tame Grey Wagtails and these rather dreamlike Mute Swans (that’s the reason for the slight blurriness obviously…). 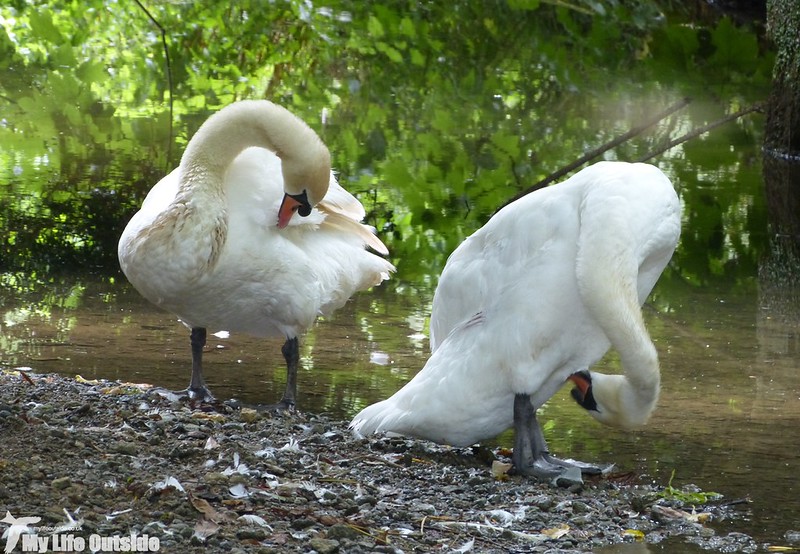 Heading out along the Macmillan Way we picked up the yaffling calls of a Green Woodpecker as we threaded our way between meadow and tree lined river. Then a flash of white caught my eye on the slope above us and quickly resolved itself into a Marbled White. Quick as a flash I was up after it as although not a particularly rare species it is not all that prevalent in my local area and in truth I can’t remember the last time I saw one, if ever. Once again the stiff breeze which seems to have been a constant companion for much of the summer was keeping them in the air but eventually I found a settled individual.

In all there were at least six Marbled Whites on the wing but by the time we’d completed the walk that count had easily risen into the hundreds! I can’t remember the last time I got so excited by a butterfly. In fact that early encounter rather set the scene for the day as a clearing sky seemed to bring the butterflies out in ever greater numbers. In the end we saw ten species including Comma, Marbled White, Gatekeeper, Meadow Brown, Ringlet, Peacock, Red Admiral, Brimstone (though sadly only at distance), Small Tortoiseshell and Small Skipper. There were also excellent numbers of Six-spot Burents about keeping up the tradition of recent weeks.

Against that army the birds were going to have to work pretty hard to compete and we were happy to see, amongst others, Mistle Thrush, Buzzard, Swift, Swallow and an adorable young Treecreeper being fed by its parents. Photographic opportunities were a little harder to come by but I quite like this silhouetted Chiffchaff which was belting out its song until chased off by a rival.

More insect interest came from the meadow above Danks Down Wood where an array of thistles delivered several Ladybirds. Now my camera is less than impressive when it comes to photographing such small fare but I did manage to get the following pair of 7-spot’s and also, alas, an invasive Harlequin. The latter is now officially the UK’s fastest invading species having spread to most areas in little more than a decade and is now known to have dramatically impacted the populations of seven of our native ladybird species.

What we hadn’t expected to find on this walk were two of the biggest fungi specimens we’ve ever come across. Each measured at least a couple of foot in diameter and if my fledgling ID skills are up to much I have them keyed out as Meripilus giganteus (Ginat Polypore) and Ganoderma applanatum (Artist’s Bracket).

Nearby was this Beautiful Demoiselle, a mere taste of what treats awaited us on Saturday.

By the time we’d made it back to Castle Combe any initial disappointments had been well and truly forgotten. Perhaps not England’s prettiest village but the surrounding countryside is certainly a damn good place to explore.

I'd much rather see what you photographed and shared here the wildlife, flora, fauna etc…mankind has made passage to the future now and the past is over.