Yesterday was one of those truly special days where everything falls into place to produce memories which last a lifetime.

We were up early, at least by our standards, and by eight had the kayaks loaded and strapped down without too much fuss. Given that we last took them out a little under twelve months ago I put this down either to a fluke or, less likely, that we kind of know what we’re doing by now. The rest of our gear including paddles, life-jackets and paddles had been packed the night before so it was just a case of adding food and drink before we hit the road for our date with high tide. The drive over to Pembrokeshire was surprisingly smooth and devoid of traffic and as we pulled into St Brides I immediately knew that we’d made the right choice. Spread out before us the sea was a tropical blue rarely associated with this part of the world, not quite mirror smooth but with swell at an absolute minimum. A light breeze was keeping temperatures in check helped no end by the sweltering thirties of the past week having dropped to a much more bearable twenty one. It only took us a few minutes to get kitted and down to the waters edge, eager to be on our way. 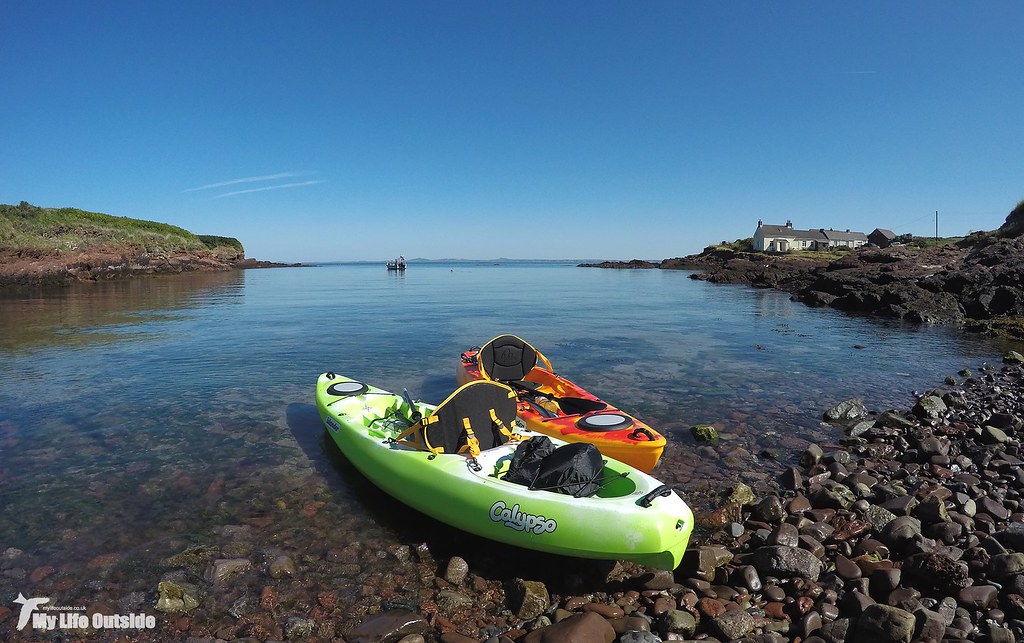 As always when paddling the coast we had a choice to make. On this occasion left won and as we made our way out of the narrow inlet we could tell that visibility today was going to be excellent. The slightest hint of haze did nothing to obscure our views out to Skomer and the bright white mass of Grassholm beyond whilst below water clarity was some of the best I’ve ever seen. Our plan was to stick close to the cliffs, exploring every little nook and cranny and it didn’t take long to find our first hidden feature. At only a couple of meters wide you won’t find this wave worn inlet highlighted on any maps but as we slipped into the cool embrace of its high rock walls we appeared to enter another world. Suddenly the background sounds of the wider landscape were extinguished bringing a sense of calm that I’ve rarely experienced of late. In fact the only real sound was that of gurgling water as it was squeezed in and out of what turned out to be a substantial undercut in the surrounding cliffs. Isn’t it amazing how the power of water alone can shape our coastline like this. 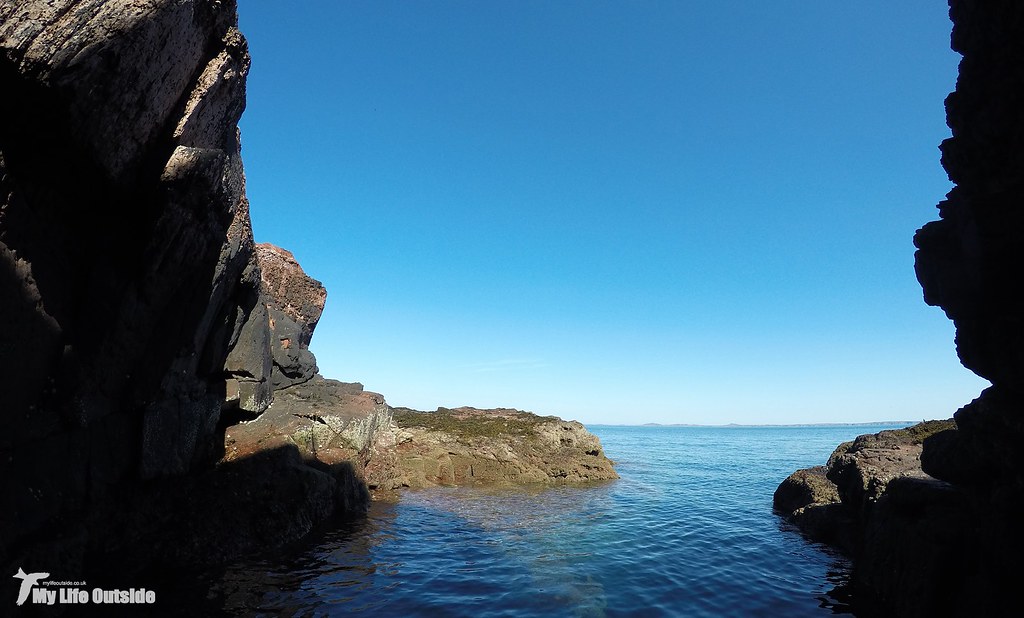 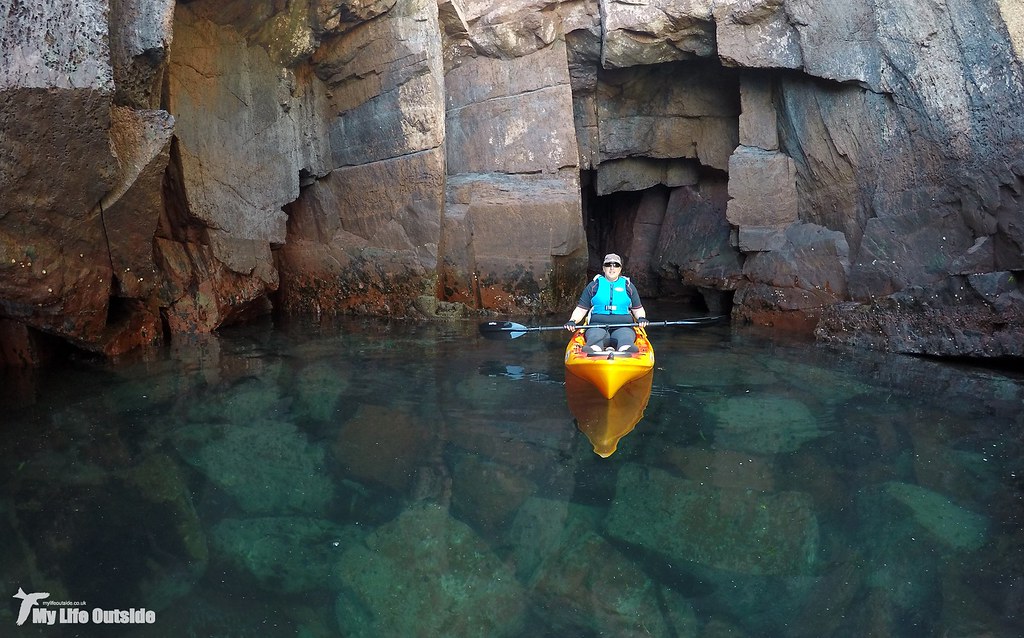 Emerging back into the full power of the sun was certainly a reminder that this heat wave is very real but the lighting was superb as we continued to explore. Being predominantly a sandstone geology lends the rocks here a lovely red colour with twisted contours and fault lines laid bare for all to see. The local birds are more than happy to take advantage of numerous narrow ledges created as a result and we were delighted to find several pairs of nesting Fulmar (including one chick), as well as Herring Gulls, Common Gulls, Chough and even a Peregrine Falcon passing through. Lower down Oystercatchers and Cormorants were our regular companions and I even managed to find my first Common Sandpiper of the year. Being so close to Skomer it was no surprise to see find a few Guillemots knocking about whilst diving Gannets off in the distance were as impressive as ever. 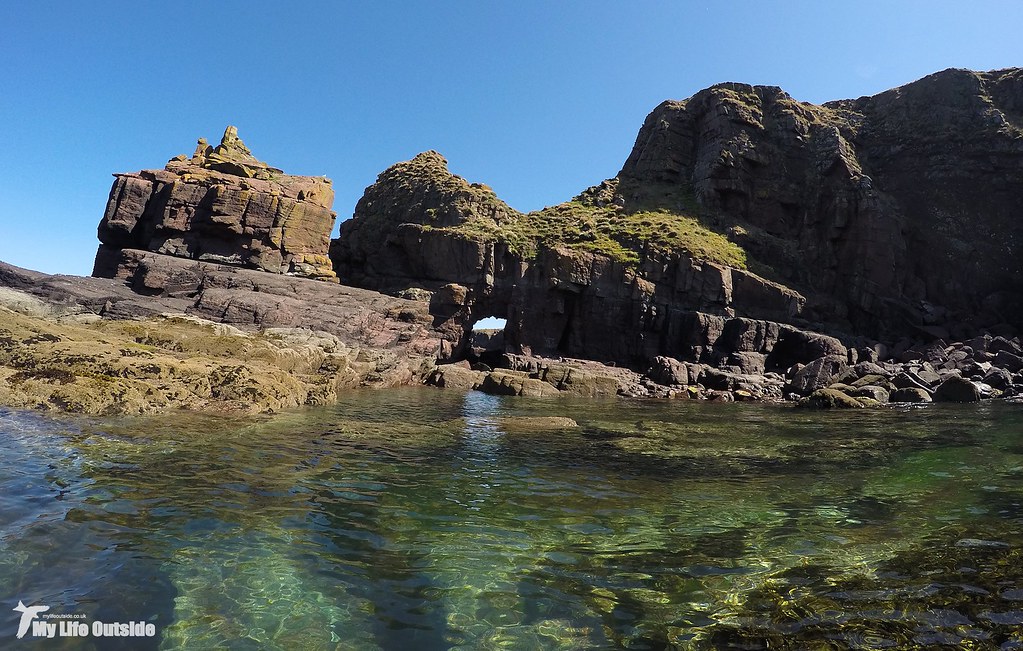 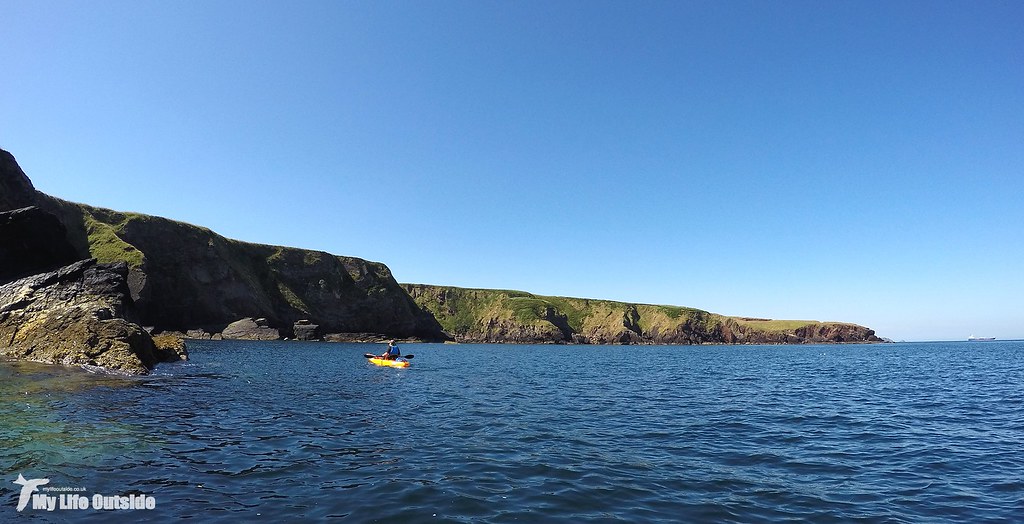 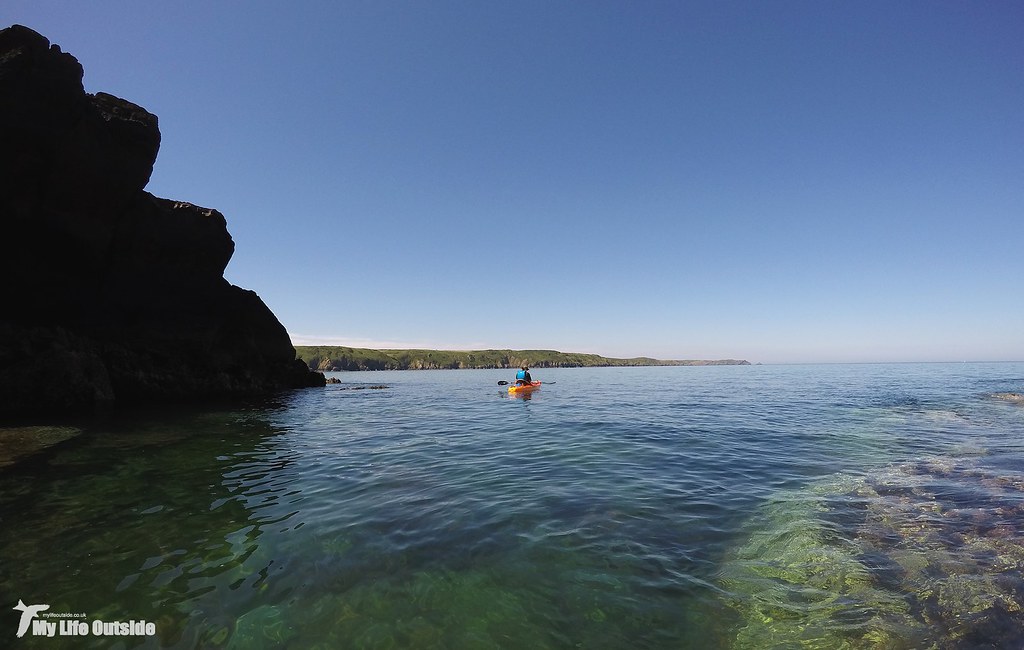 Rounding Tower Point where the remains of a hillfort are steadily falling into the sea we came across what we were really hoping for on this trip, sea caves. Two were wide enough for us to paddle right into with the largest stretching back some thirty metres or more. I wonder how many other people have passed this way before us. 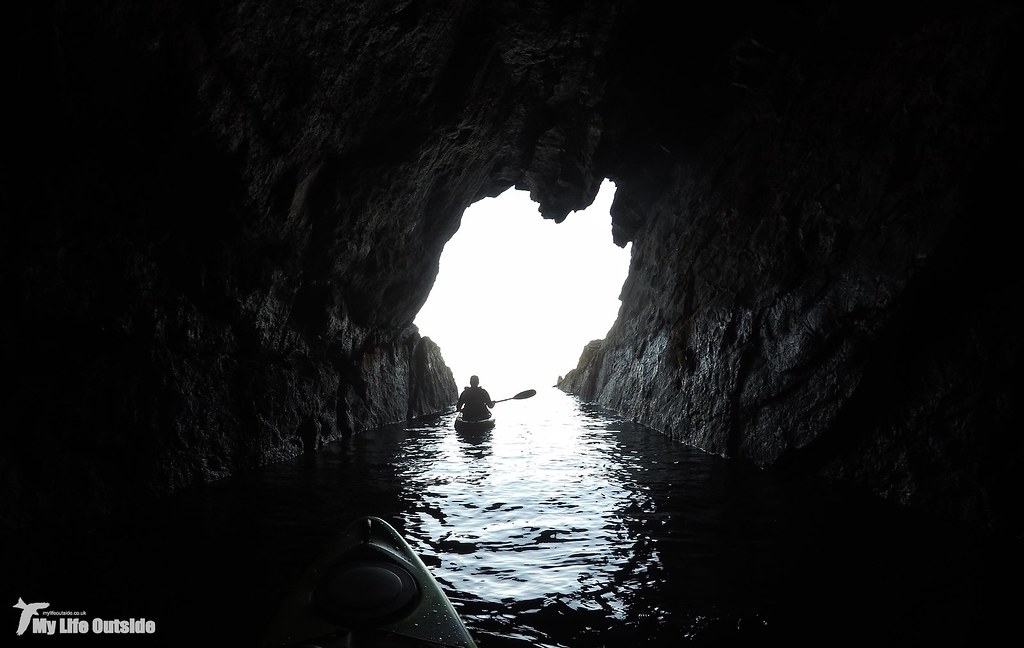 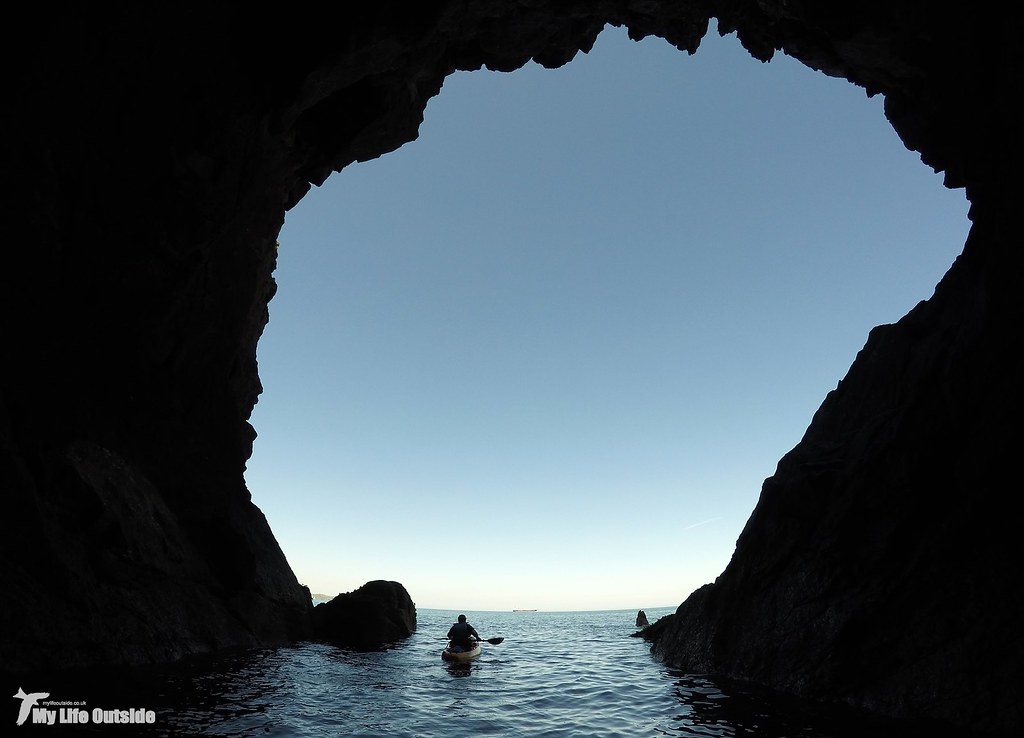 Underway again we passed a fellow kayaker who asked if we’d seen any Spider Crabs yet. We hadn’t but it certainly wasn’t for lack of trying. These long legged crustaceans are plentiful in the waters off Pembrokeshire and a species very much on my “to see” list. In the end it was Emma who struck gold first, spotting a couple amongst seaweed deep beneath us. It took me a while longer to find one myself having not expected them to look so pale. The discarded shells we normally find washed up always seem much redder in colour whereas these appeared almost white. Once my eye was in though there was no going back and there must have been hundreds if not thousands spread out beneath us. Usually individuals but occasionally in groups of five or six they were fascinating creatures which proved incredibly tricky to get a decent photo of. I can only presume that trying to position a kayak drifting with the currents directly over a crab which is itself moving is something akin to the difficulties in placing a satellite into geostationary orbit. Tricky but not impossible. 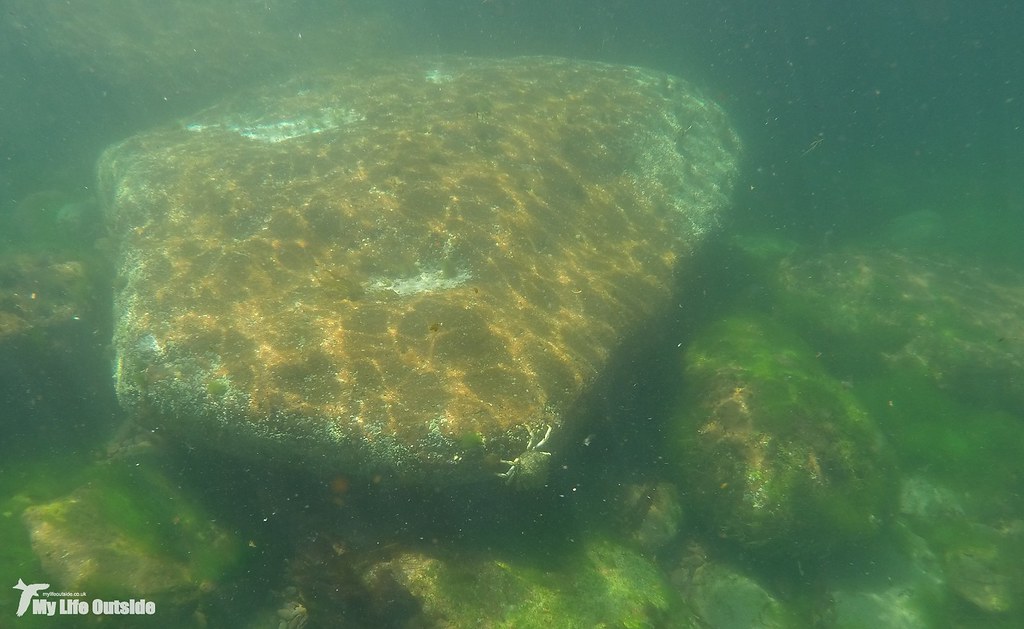 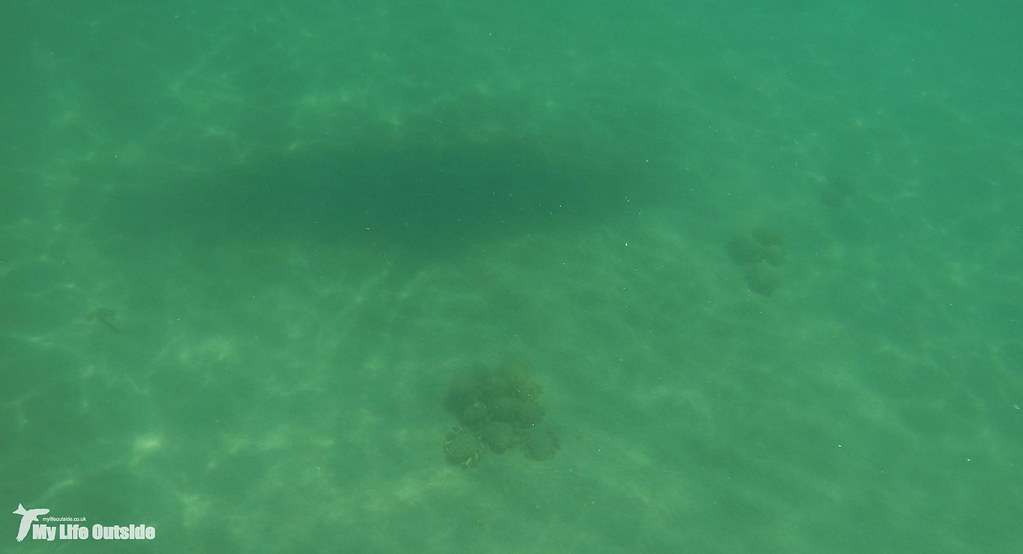 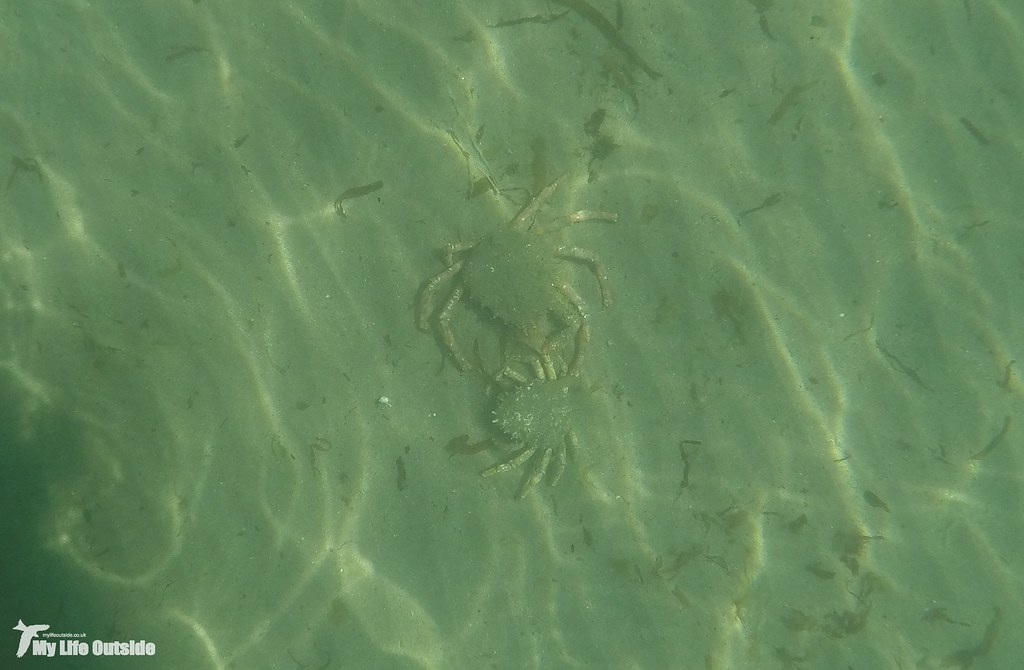 The white sands as we approached Musselwick revealed even more Spider Crabs and with the tide still high we landed and had the beach to ourselves. Albeit briefly that is for never underestimate the determination of a British tourist keen to bag that prime piece of real estate on which to sunbathe. Wading waste deep they came with food and dogs alike carried overhead, a sure sign that it was time for us to make our own moves. 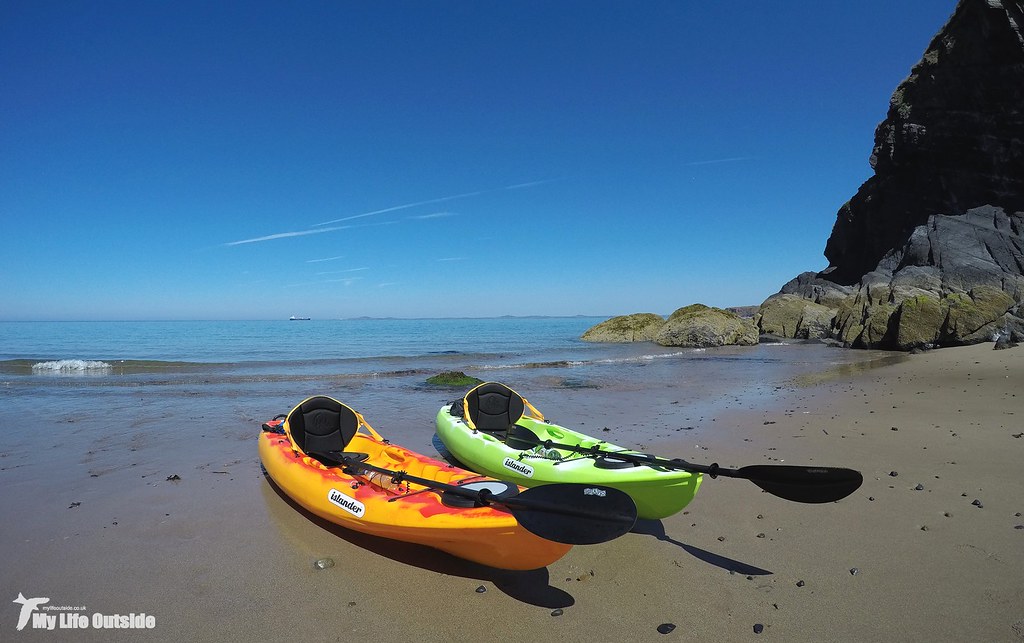 Although Skomer island called tantalisingly close we knew it would be too far to attempt today so instead set Martin’s Haven as the limit for our explorations. It was strange to enter the bay under our own power for a change but with arms aching this was definitely the right place to turn and head for home. 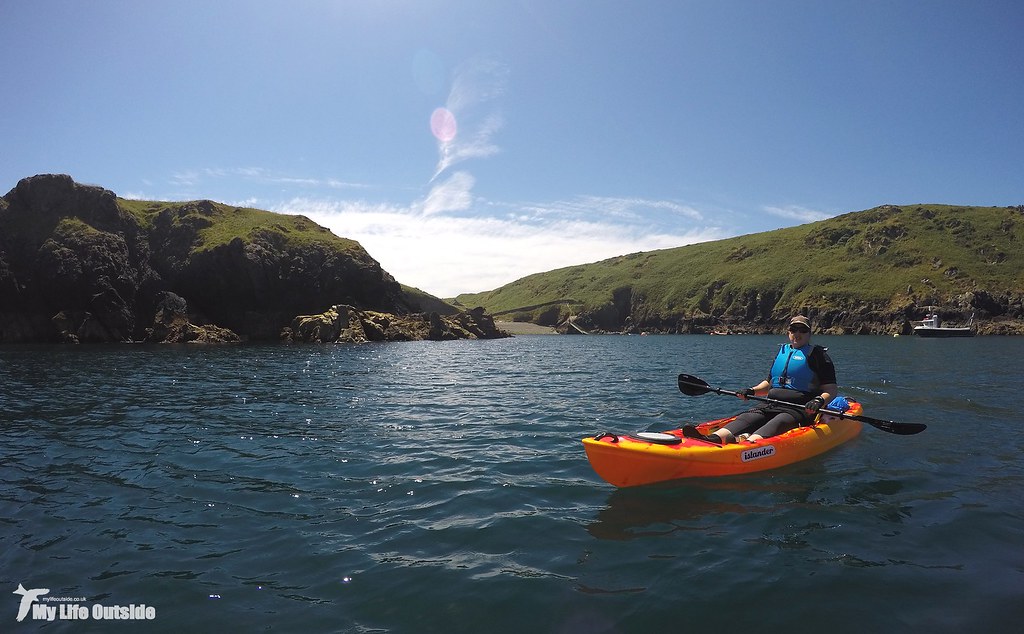 Our return journey was just as enjoyable and with the swell having slightly increased gave the opportunity for some fun and games as we landed on another secluded beach. I didn’t capsize but that was no thanks to an errant wave which washed over my deck from behind. 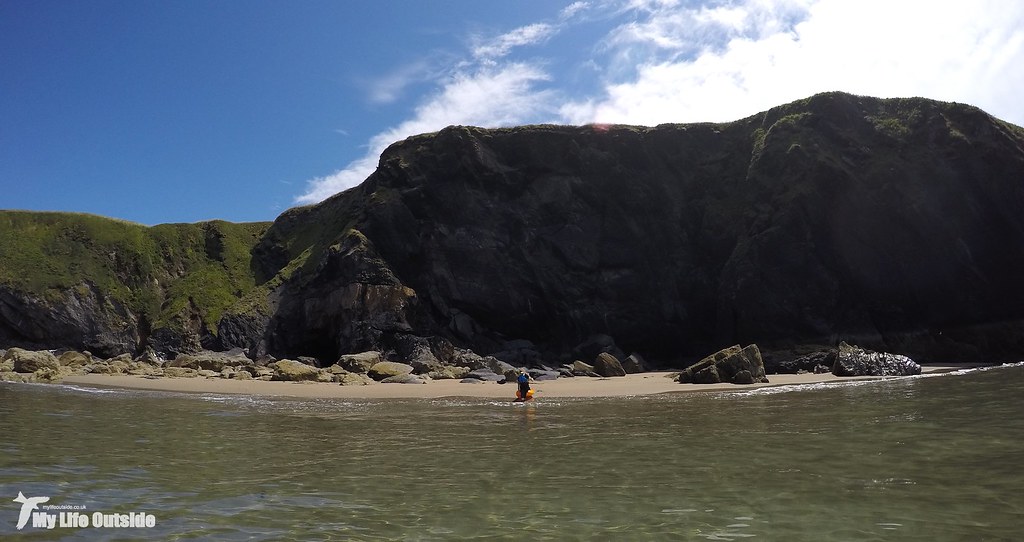 We’d covered twelve kilometres in all by the time we pulled back into St Brides, our longest paddle to date by far. Other than a sore hand on my part we’d managed surprisingly well (I’ll gloss over somehow only applying sun cream to one leg – ouch!) and as I stated at the opening of this post had enjoyed one of those days which simply leaves you sporting a massive grin. More of the same please and what a way to round off this years #30DaysWild challenge.

Such a great adventure and description! How long did this take you? I'm doing it today