I promised something a little more exciting for day twenty four of #30DaysWild and, despite regretting hitting publish on that sentence almost immediately, I hope you’ll agree that we’ve managed to deliver in style. It all began a little after midday way out west where we and thirty other intrepid volunteers and supporters of Sea Trust gathered in the ‘luxurious’ surroundings of Fishguard ferry terminal. Were we here to admire what must be one of the world’s largest collections of faded and dusty plastic plants? An unexpected bonus for sure but, as the Stena Line superferry docked just outside hinted at, not our main objective. We were in fact here to take part in the Sea Trust Stena Dolphin Day, a joint collaboration between the fantastic people at Stena and Sea Trust itself. Our plan? To take the ferry out and back to Rosslare, Ireland whilst revelling in more cetacean sightings than you can shake a tuna at. Even better was the prospect of being allowed access to the usually off limits bridge thanks to some wonderful generosity from Stena. It was a mouth watering prospect and I couldn’t wait to get going.

Boarding was a straightforward affair and after brief introductions it was up on deck in time for us to cast off. Conditions, though dry, were less than ideal with low cloud and compromised visibility but I had utmost faith (some would say foolishly) in the forecast which promised improving weather as we headed out. To be honest whatever happened I’d have left happy as just outside of port two Cory’s Shearwaters flew straight across our bow. Large, pale and gliding on huge wings they were simply unmistakeable. This bode very well indeed and as we continued to gain speed Manx Shearwaters started to appear, significantly smaller than their rarer counterparts and a regular out in these waters. Interspersed was the occasional Guillemot, Razorbill or Fulmar and it wasn’t long before I got to call our first Puffin of the day. With conditions being so dull and us sitting atop a large liner photography was going to prove tricky but I tried my best to get something on record. In truth though you really need to experience this for yourself as no amount of words can pass on the sheer joy at watching flocks of Shearwaters cavorting across the waters surface.

It was a big tick for the birds then but what about those cetaceans? Well Strumble Head was our first big chance as a regular haunt for Porpoise in particular but with the lighthouse barely visible through the murk we drew a complete blank. Perhaps a Bottlenose Dolphin then of which I was assured that a pair had been all but guaranteed off the breakwater in recent day’s? Not on this particular day it would seem. Now I’ve been on enough trips through the years to know that it’s not over until you’re back on dry land so we kept our eyes peeled as we continued to make good time. A choppy sea state made spotting any breeches incredibly tricky and that only got harder as we broke free of our weather system and emerged into glorious sunshine roughly halfway across. Where once we’d been contending with breaking waves we could now also add blinding glare to the mix making even Shearwaters hard to pick out. In fact it was quite remarkable how the latter had gone from seemingly black birds to dark brown, a stark demonstration of how varied lighting can impact ones observations in the field.

I continued to snap away, mostly unsuccessfully, until Tuskar Rock lighthouse hove into view along with an increasing density of sea birds. Here Risso’s Dolphins were a distinct possibility but despite adding a couple of Common Terns to our records we again drew a blank. This was starting to feel a little ominous but as we pulled into Rosslare our consolation prize came in the form of a few Kittiwakes, eight Black Guillemots and three Hooded Crows. The first two species were nesting on the outer breakwater whilst the Hoodies caught me completely off guard. It hadn’t even crossed my mind that these would be the dominant Crow species out here so mine and Emma’s enthusiasm may have appeared a little misplaced to those in the know. 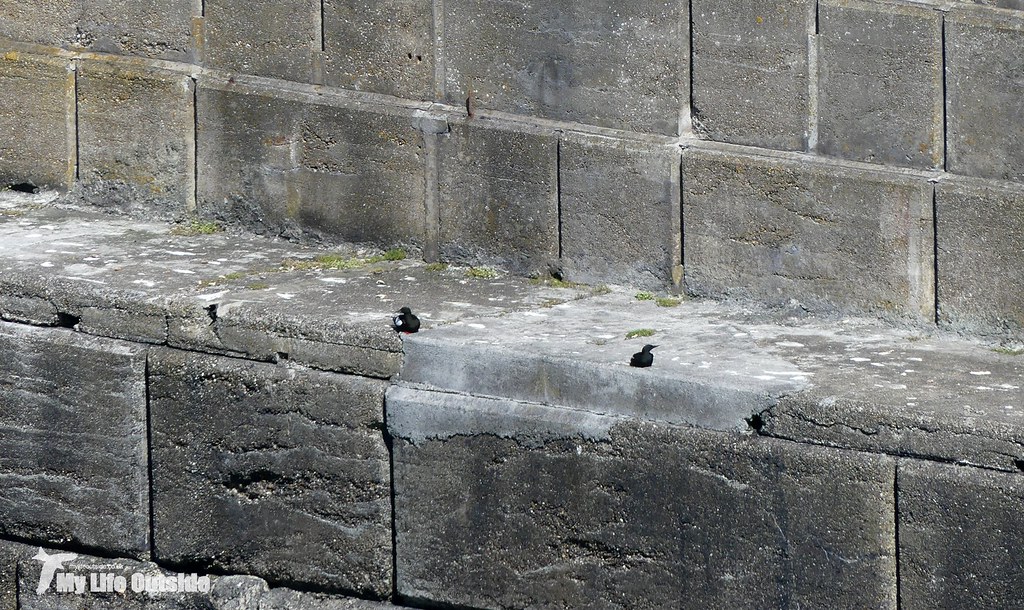 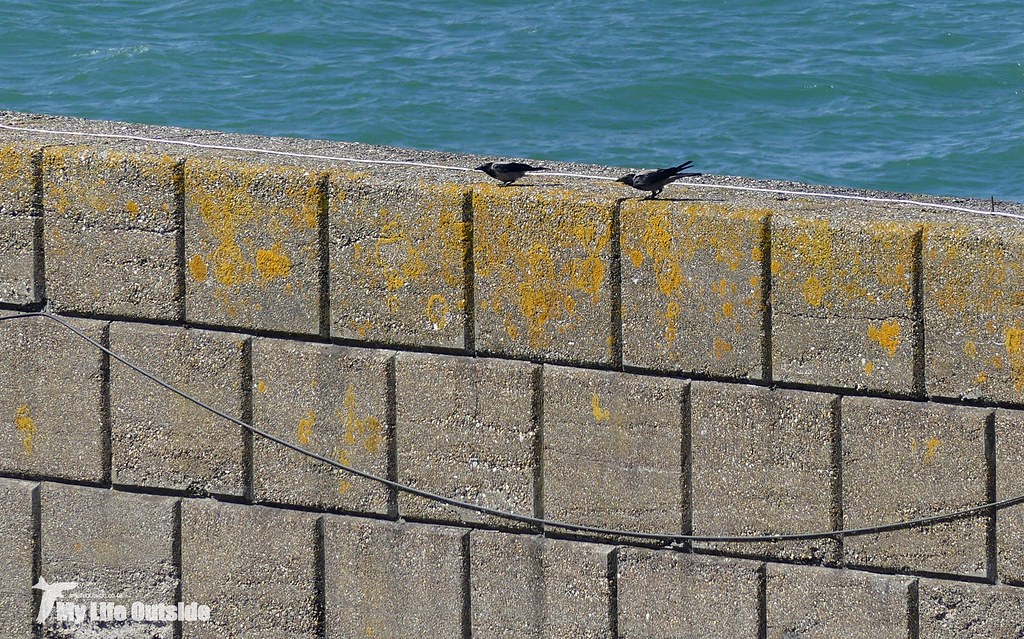 With just over an hour to kill before the return journey we enjoyed a free meal and quiz. The food was pretty darn good but the less said about our quiz performance the better. Turns out I really need to swot up on my sea mammals!

Anyway we were soon under way once more and it was immediately apparent that the sea state had calmed significantly. I had a very good feeling about this and set about searching with renewed vigour. As before though it was the birds which performed well early on with small groups of Common, Arctic and Sandwich Tern all passing by. Then came an unexpected pair of Turnstone some distance out before a single Mediterranean Gull in full summer plumage. Welcome all, as were the ever increasing number of Manx Shearwaters, but what of those cetaceans? It was all feeling rather familiar until Emma put up the shout that she’d seen a large splash dead ahead. Cue much scrambling for binoculars before the next splash was witnessed by several others, myself included, as what we believe was a Risso’s Dolphin leapt completely clear of the water before twisting and slamming into the sea side on. Absolutely brilliant as not only was this a brand new species for me it also seemed to open the floodgates. Hot on its heels we had our first encounter with a pod of Common Dolphins which approached rapidly from our right before diving beneath the ship. These were quickly followed by another pair which did exactly the same before a final pod, this time coming in on our left, finally allowed prolonged views for all. Frequently leaping clear of the water they were simply magnificent, smaller than I remembered but with those white flanks completely unmistakeable. As our courses converged the views got even better finally allowing me to get a couple of decent shots.

This was what we’d been hoping for all day and I’m sure a wave of relief swept through everyone that we weren’t going to be returning empty handed.

By the time a considerably sunnier Strumble hove into view I was pretty cream-crackered having been stood up for almost seven hours on watch. I wouldn’t have missed it for the world however and, as did the rest of our group, left with a massive smile on my face.

All that’s left to ask now is Cliff, how long until the next one?